With an exceptionally intense monsoon season turning Singapore into one big outdoor rainforest shower, our next few days of excursions and adventures were squeezed in between drizzle, downpours and thunderstorms. What follows in this entry is the best of the next five days of our visit.

Following a really good afternoon visit to Telok Blangah, we returned again the next day (2nd January) in another attempt to get a picture of the Red-billed Blue Magpie. A sense of deja-vu was in the air as we arrived late afternoon after a day of heavy rainfall. A couple of White-crested Laughing Thrush greeted us, albeit fleetingly as me made our way along the walkway. 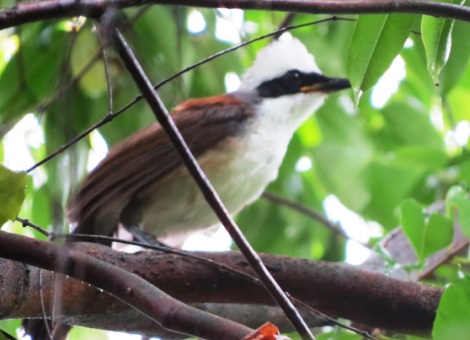 Despite waiting until almost darkness there was no sign of the magpie. We were very happy to get a Greater Coucal hunting below us in the post-rain mist though. Initially blogged as a Lesser Coucal thanks to our Singapore birder friends it has been id’d as a Greater Coucal! A lifer again for us and a lucky find in this non-forest environment. Thanks to Alan Ow Yong and Thio HB from Facebook for sharing the knowledge!

Also present on our previous vist but a little more obliging today was this Asian Brown Flycatcher. In typical flycatcher behaviour it would frequent several regular branches, holding position for a while before making another sortie.

With hopes of boosting our sightings and our morale we decided that a morning start the next day would see us at Pasir Ris Park. For once we had a clear and bright-ish morning and hopes were high of catching some good birds. A Stork-billed Kingfisher (my favourite of Singapore’s resident kingfishers) was our first bird of the day. 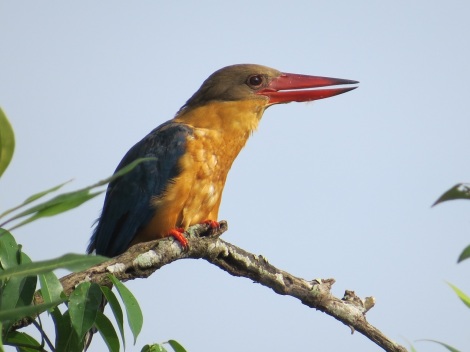 Sadly on this morning at least, this was the peak of our sightings. Not altogether surprising as there were several school parties visiting the boardwalk and one gentleman practising his rather loud and droning pipe. He could be heard throughout the boardwalk, leaving very little opportunity for locating any birdsounds. We met two other birders waiting for raptors at Car Park C and following friendly advice and stories, we decided a change of scenery may bring a change of luck. Whether it was nostalgia, desperation or something else, we decided to head for Bidadari where there had been some cuckoo reports recently.

We have blogged about Bidadari on most of our Singapore visits and may well be coming back to this subject in the near future but for now our focus is on our short visit on a hot, sunny lunchtime in January. It was our first return to Bida since the construction had commenced and the sad strip of land that remains made our hearts sink on arrival. We found a Bida regular on site, which gave us hope there was some feathered interest around but all we had were the common birds during a short circuit. We had all but given up and were on the way out to the main road to catch a cab when we found a lifer just outside Bida, in the shape of this Pond Heron hunting in the grounds of Mount Vernon columbarium. 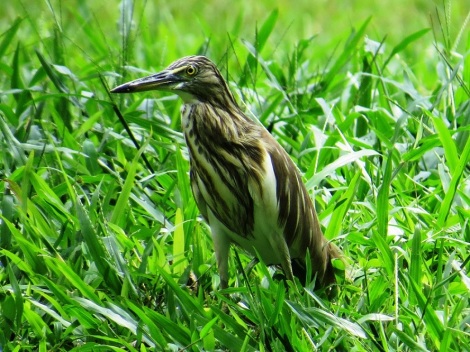 Whether this in an Indian, Javan or Chinese Pond Heron it was too early to establish, or to quote Alan OwYong “not ripe enough yet”. With plenty of time still left, we took one more taxi and made for Dairy Farm. Dairy Farm has also been a genuine hotspot for us on previous visits, and we have enjoyed the solitude and calm of the space, birds or no birds. With storm clouds gathering, the light falling, and some renovation work going on, it was really pretty quiet. We did keep eyes on both the sky and the ground however, and managed another lifer for the day in the shape of this quite shy Yellow Striped Tree Skink.

The Herpetological Society of Singapore reported on one of these tiny skinks at Central Catchment last February, describing it as “rarely seen in Singapore, making it a very special find indeed!” 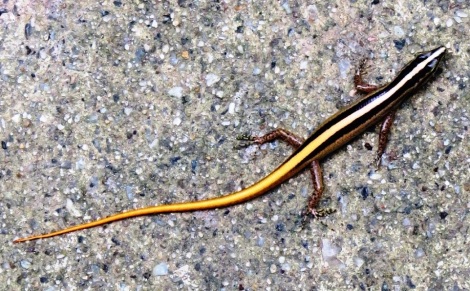 Mildly deflated at the paucity of action but by no means unbowed we were back out the next day at a new location; West Coast Park. Again, there had been sightings of cuckoos and Black-capped Kingfisher here but despite making a full circuit we saw neither cuckoo, black-cap or indeed birders. We did have the lovely sight of a good flock of Pied Imperial Pigeons tree-hopping around the park at least. 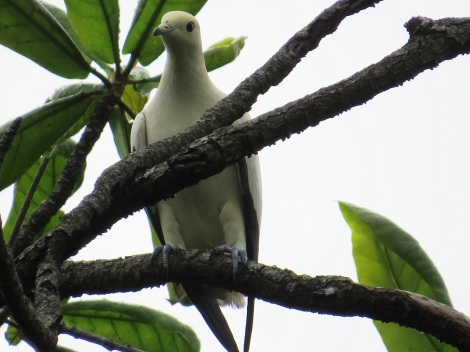 Kingfisher representation came in the form of the ever noisy, ubiquitous Collared version.

This was a fine reward for Mrs Sausage whose patience and determination has meant that our blog would be very picture-light if not for her tenacity with stalking our targets.

A new day and a new location as we arrived at Kranji Marshes on January 6th. Surely today would bless our persistence with a reward or two? Signs were positive. The cloudy conditions meant there weren’t too many people around and Mrs Sausage spent a long time on the main path capturing angry-browed Pied Fantails and some elusive, fast-moving Daurian Starlings in a frenzied feeding flock.

I had wandered ahead, eyes peeled for the Black-capped Kingfisher amongst other targets. I reached the end of the path and two birders were paying some intense attention to some trees under the small hill. When I asked about the target they told me “Booted Warbler”.

I managed a few shots and then went to find photographer-in-chief, Mrs Sausage to join me.

Not an especially stunning bird in terms of plumage or behaviour, but like the Barred Warbler we saw at Staines Moor a few years back, it is the rarity of the bird that was getting many excited. By all accounts this was the first record of a Booted Warbler recorded in Singapore. First seen back in December it was certainly making sure it’s first visit was a long one! A genuine Singapore first.

With such a super start to our visit we took some time to investigate the views from the hides. Reward came fast here too as a Lesser Coucal offered lovely views from the first hide Topping the foliage at a distance that was reasonable for our bridge cameras. 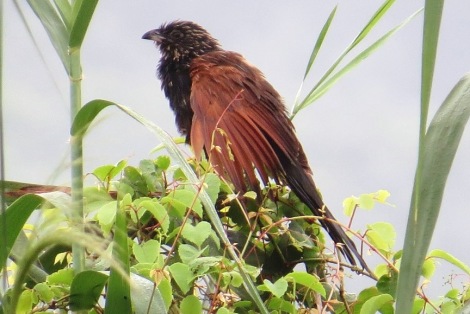 There’s something quite engaging about the Lesser Coucal. Despite it’s corvid-like appearance it is a member of the cuckoo family but is non-parasitic meaning it raises its own chicks. Shy and often fleeting in their appearances, we’ve come to really enjoy and appreciate the sightings of these distinctive birds.

In the same hide and at the same time as the Lesser Coucal was showing we also had this Red-wattled Lapwing within range.

A very fast Slaty-breasted Rail crossed our path as we left the hide to climb the main viewing tower. Too fast for a picture but a clear sighting and another bird for the day. As we climbed the tower we had superb views of Black-winged Kites hunting over the reserve. The bonus of climbing the tower meant we had eye-level views of the kite taking regular breaks from hunting as it perched atop the surrounding trees in the middle distance.

With Mrs Sausage on Black-winged Kite duty, I made my way to the top of the tower hoping for a different view of the white hunter. I had to stop almost as soon as I made the top though. With the tower being over 10 metres in height I was looking forward to the panoramic view of the reserve, my focus was immediately drawn to something at around a meter in front of me. On the top of the ledge of the tower where I was about to rest my elbows was a stunning and fully extended Paradise Tree Snake!

I tried to call Mrs Sausage up as she was most keen to find some snakes on this trip. Too engaged in the Black-winged Kite, I had to walk back down a level to get her attention, hoping that the snake wasn’t going to disappear on me.

As we both came to the top it was clear that whilst the snake hadn’t left the tower, it was very, very mobile. We kept a respectful distance from the reptile as our knowledge of Singapore’s snake is still limited. We were able to indulge in some lengthy photography. 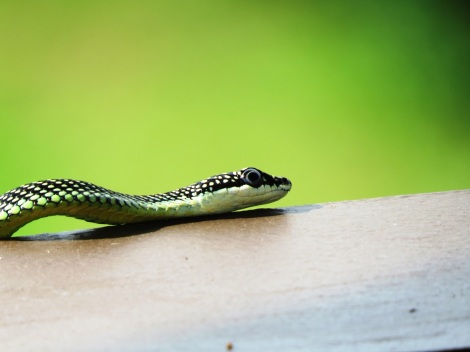 It then became clear to us that we were unable to walk back down from the top of the tower as the snake was circling the floor around the stairwell. After several circuitous movements, it started to move downwards using the stairwell. This effectively barred our way down as we didn’t want to provoke or stress the snake in any way. Stuck with our newfound legless friend, we decided to make the most of a rare opportunity to observe and enjoy the company of this beauty.

Aside from being an excellent climber, we read that it is able to glide from tree to tree (or perhaps tree to tower in this instance.) The Paradise Tree Snake, whilst venomous, is not of any serious harm to humans. It has just enough venom to immobilise its preferred prey of tree-dwelling lizards. Evidence of this presented itself to us as we caught up with the snake on halfway down the tower to find it half swallowing a small lizard.

With the venom-injecting teeth located at the back of the mouth, the Paradise Tree Snake needs to swallow prey somewhat before it can effectively incapacitate it.

We had hopes rather than plans to find snakes on this trip but this incredible experience was something we wouldn’t have even dreamed of happening. Without disturbing, teasing or stressing itm we were able to watch it behave and even capture prey in its own way. A superb experience in every way. 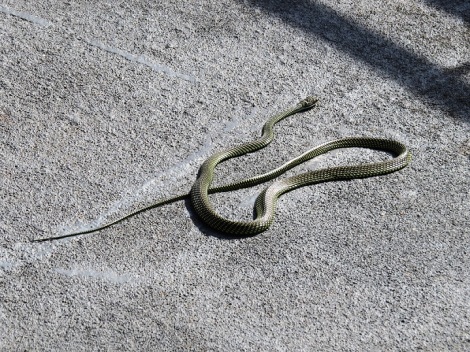 We were genuinely buzzing as we left the tower and if our day ended there and then we would have been more than satisfied. We were lucky enough to find a few more creatures of interest as we made our way back down the main path. Adding to the non-bird sightings were a good number of active Common Bluebottle butterflies. 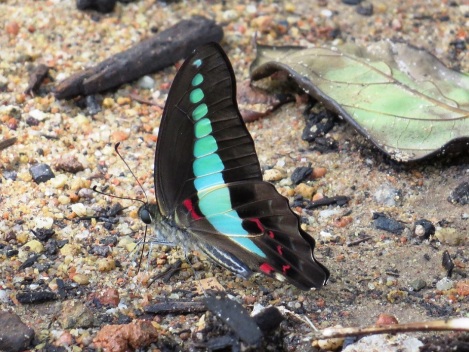 Usually a tree-top flutterer, we found a congregation of them around drying puddles. No surprise really as research shows us that the males of this species can be found feeding on roadside seepages or urine-tainted sand. I won’t criticise their choice of libation, not least as these were our first good butterfly sightings of this trip! 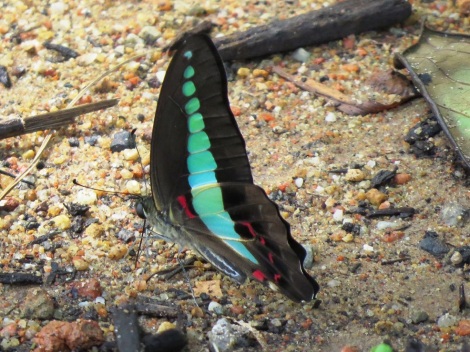 Just above the glittering butterflies we found a dark, ominous shape. For once these weren’t storm clouds but the welcome sight of a Changeable Hawk-eagle. A rich, chocolate coloured dark morph raptor, this was in the same tree we found one in last year.

Completing the sightings was Mrs Sausage find of this invasive Gunther’s Tree Frog on the ponds by the main entrance.

Unquestionably the best day of our trip so far. To be honest, I’m not sure anything will be able to surpass the Paradise Tree Snake experience we had. Even without this however, we were more than chuffed with a Booted Warbler rarity, a skink lifer and some great sightings!