I suspect my folks think my fascination for birds and the way in which I pursue the interest is strange. I completely understand why they would think that, particularly dad. He was a kampong boy  who grew up catching fish and insects, building things like catapults from scratch using fallen branches, and going swimming in rivers. He has seen many birds in his time, and while he doesn’t know all their formal names and technical specifications, he knows most of their names in the mainly Malay vernacular – ayam ayam, mata putih, terkukur, merbuk, bangau. He also knows cultural snippets about the birds that field guides often don’t cover, and doesn’t discrimate the lupsups from the rarities. He still sees many birds, without going to any extra effort, and though he may not know all their names, he has a natural ease in his mode of engagement in the field. So I can see how all my binoculars, cameras, and internet/field guides may seem bizarre.

Both our approaches with birds are of course context dependent – we grew up in different Singapores; and I am not one to romanticise the kampong life, or to eschew technologies. I can’t conceive of a life without the internet. Nonetheless, I cannot help but feel I should know, and should have always known more about this bird or that, not technically, but as part of my life. I feel I should have long developed this smooth ease with ‘nature’; integrated into an everyday rhythm, rather than just as sporadic adventures of things that are out there. So I find it interesting that I seem to get as many tips by listening to dad’s casual explanations, as I do from following birding blogs and sites. It is with his directions that I found the charismatic punks I was looking for.

Accompanying me to Kent Ridge Park for these White-crested Laughingthrushes was Dirk Tomsa, who generously gave me his time yesterday. Dirk very kindly agreed to assist me with my exploratory study on technology and birding in Singapore, and was all the more gracious in allowing me to indulge in a few snaps of these fellers at the same time.

There were a large number of this introduced bird species in several social units around the Park. More than a few individuals seemed completely comfortable with proximity to people. Two or three were incredibly trusting, coming right up to me, which makes me wonder if they might be used to being fed by people. 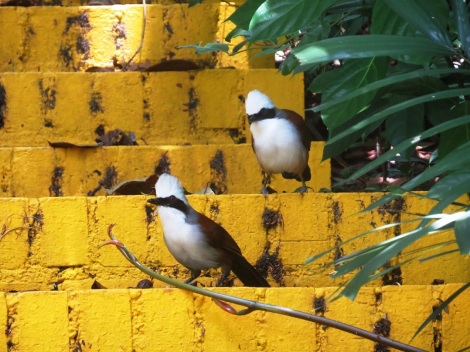 The walk around the park brought me valuable insights from an experienced, interested and interesting birder. It also brought both of us a Changeable Hawk Eagle overhead (first picked up by Dirk’s ears), Crimson Sunbird, Oriental White-eyes, Lineated Barbet, Blue-throated Bee-eaters, and a Black-naped Oriole battering its rather large Praying Mantis dinner against a branch. A full list of the day’s sightings can be found on Dirk’s Ebird checklist.

The technology-birding connections showed up a rather surreal but amusing parallel today, when I was accompanied to the Botanic Gardens by a dear friend. When we arrived, she told me to go ahead, full steam. The reason for her keenness – while I looked for birds, she was going to look for Pokemons. The Botanic Gardens is apparently one of the hotspots within the game. I would soon be made frustratingly aware that birds are far less open to capture than Pokemons. The Striped Tit Babblers and Ashy Tailorbirds made it abundantly clear that they would not play ball for my camera, despite coming teasingly close.

Nonetheless, if one perseveres long enough, the rewards might be be rather pleasant. While my friend did not manage to find her Three-headed Ostrich (Dodrio dodrio), I stumbled across a small group of Blue-crowned Hanging Parrots, and the sighting of these petite native parrots was a first for me. Although not hanging, this male was obligingly perched:

If you are a birder/nature enthusiast/wildlife photographer based in Singapore, I am keen to speak with you! If you would like to assist with my research, please do get in touch.

2 responses to “the wisdom of others & pokemon birds”