Having had such a wonderful time in the Forest Of Dean back in March, it seemed the perfect place to revisit and to celebrate Mrs Sausage all but finishing her PhD. With migration season in full flow, warmer, sunnier days and healthy sightings reported we headed west in hope and expectation for the second weekend in May.

With check-in at our BnB not until 4pm, we headed straight for RSPB Nagshead, arriving late morning. Despite the overcast conditions it was pleasantly warm and we began the search for our first target bird, Pied Flycatchers. One of my favourite woodland birds, Nagshead has a healthy breeding population and it only took us around 10-15 minutes before we started hearing and then seeing the distinctively coloured birds. Our initial sightings were of very mobile, tree-hopping flycatchers and I managed a few record shots.

We popped in to the Campbell Hide to patiently wait for any sightings of another of our hoped for birds of the trip, the Hawfinch. Half an hour of patient watching bore zero feathery fruit so we decided to make our way onto the nature trails. Once clear of the path to the Campbell Hide we spotted a male Pied Flycatcher making regular sorties to one of the many nesting boxes on the reserve.

It was the first time I had really been able to notice the chocolatey brown colouring on the wings. A bird I can never get tired of watching and a perfect way to start our weekend.

Despite a lovely walk along the rest of the Short Trail, we were largely bereft of clear sightings of too much else. Just missing out on some Redstarts but hearing plenty of Chiffchaff, Blackbirds and Song Thrush in particular throughout the forest. A brief sortie down to the Lower Hide found Mrs Sausage this Dor Beetle: 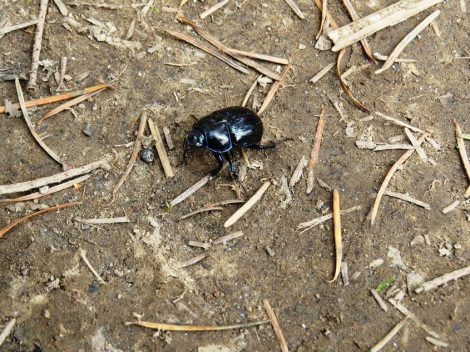 We returned back to the Campbell Hide before we left, hoping again for Hawfinch. We were out of luck once more but did get a chance to have a good chat with the seemingly ubiquitous Lewis Thomson, the RSPB warden.

With a celebration dinner of wild boar burgers at the White Horse in Staunton booked and check-in at the excellent The Rock bnb due, we bade a temporary farewell to Nagshead. We would be back the next day though with renewed vigour.

Sunday morning saw us head straight back to Nagshead, tummies full with The Rock’s fantastically hearty breakfast. It was a beautiful spring morning, interspersed with the odd passing grey cloud. The Campbell Hide was largely empty save for two other birders and we settled in for a long, hopeful wait for Hawfinches. The pond in front of the hide was drawing attention from Robins, Wrens and plenty of Song Thrush. 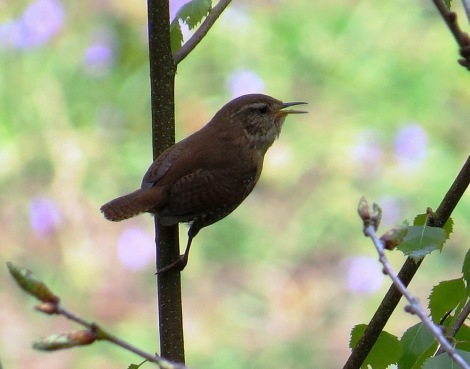 We were waiting barely ten minutes when we managed to pick up the thin, short call of Hawfinches from the canopy just above the pond. Pulses racing and fingers and eyes twitching we eagerly scanned as far as the hide view would let us. From nowhere it seemed, a Hawfinch landed onto the edge of the pond and proceeded to drink, bathe and show itself quite openly for several minutes. 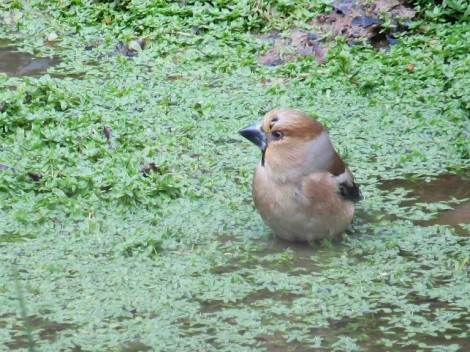 It left, only to return minutes later and repeat the process. We think it was the same bird, partly since reports from Nagshead had mentioned a pair of Hawfinch had been visiting the pond. So this could have been a tag team showing we were watching. 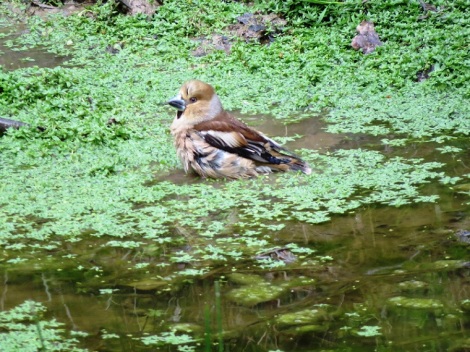 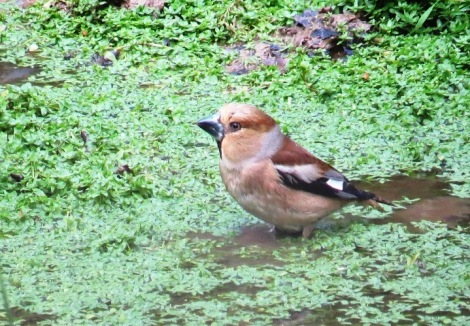 From the pond, we were then very lucky to have a few more chances of some pictures as the anvil-billed finch briefly settled in some exposed branches well within our range. 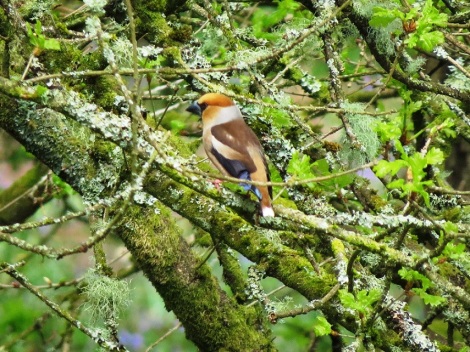 This was the kind of start to our day we could only have imagined of. Our first Hawfinches and such close and lingering views. A genuinely enigmatic bird, it’s the UK’s largest finch with a smart rust and buff plumage, and that impressive kernel cracking bill finishing off a chunky, sturdy shape, making it look like the body-builder of the finch community. A real cracker of a bird.

With the Hawfinch under our belt, we took another tour of the trails through Nagshead. A few drumming Great Spotted Woodpeckers, lots of busy Blackbirds and Song Thrushes and plenty of Blue and Great Tits were all spotted. A brief sighting of a Garden Warbler was soon followed by some teasing views of a Blackcap.

On the way down to the Lower Hide we found our first Spotted Flycatcher of the year, but it didn’t oblige long enough for a picture. The tall trees in this part of the reserve are usually perfect places to find a Nuthatch or Treecreeper. We managed to find both but only this distant record shot of a Treecreeper made the camera. 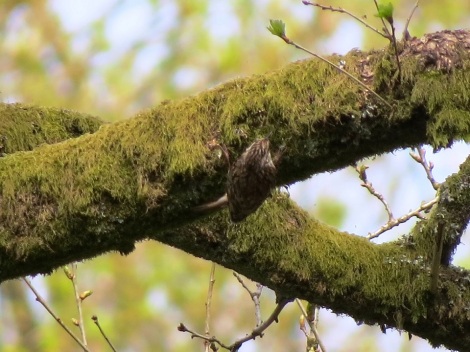 There was plenty of bird noise and activity all around us though, the pond at the Lower Hide was home to a couple of Greylag Geese and a pair of Mandarin Ducks.

After a morning that exceeded our expectations we decided to head for somewhere new in the Gloucestershire area and made for RSPB Highnam Woods. The reserve was very quiet in comparison to Nagshead. A single Coal Tit was visiting the empty feeders at the hide but we did have the the wonderful pleasure of being serenaded for around 15 minutes by a very loud but well hidden Nightingale. Highnam Woods has a good number of these super songsters and although we were unable to find our melodious friend, our first experience of hearing a Nightingale added to our growing list of ticks. A pleasant but uneventful tour of the reserve ended with these in-flight shots of a Buzzard over the car park. 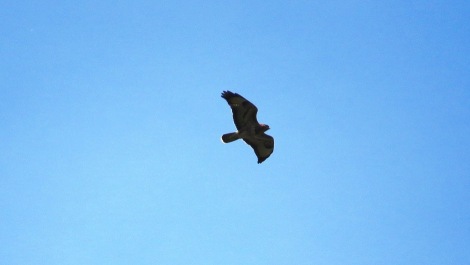 We took the 20 mile journey from Highnam back to the Forest Of Dean for a pub lunch at the very friendly Globe Inn in Coleford before indulging in a very decadent hot tub session back at The Rock. It was the perfect way to unwind from a day of birding, watching Swallows zipping over our heads and Swifts screaming up above with the green fields of the Wye Valley in front of us.

Refreshed and relaxed, we headed for Cannop Stone Works, close to Nagshead for our own evening / night walk in the forest. We were entertained on our arrival by this Grey Wagtail, seemingly engaged in a dilemma over a recently captured meal.

At no stage of our observing did the wagtail attempt to eat or hide the food anywhere, it merely moved around the stonework’s roof as if looking for the perfect place to consume it.

The area around the stoneworks is always lively, with Mandarin and Tufted Ducks, various tits and finches and one of my photographic bogey birds, the Pied Wagtail. They just never seem to stay still long enough for my camera, at least on this occasion we managed a half decent effort. 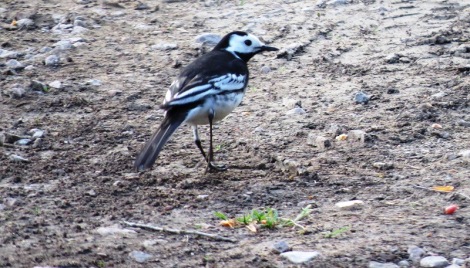 With the time approaching 8pm the light was still good and the bird activity had that characteristic end of day feel to it, quick flights into treetops and cover ready for roosting, song slowly diminishing as the light steadily fell. Blackbirds and Chiffchaff were the most persistent dusk songs we heard but Mrs Sausage also managed to get some good shots of this Tree Pipit. 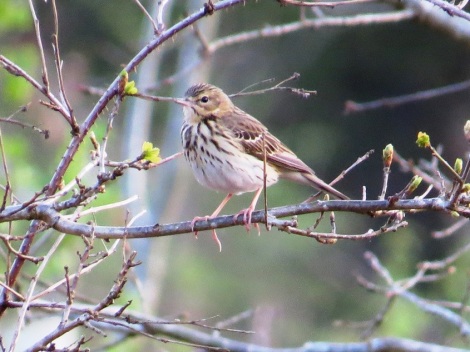 Despite an earlier report of a good number of Wild Boar in the area, they had eluded us so far and we decided to retrace our steps rather than complete a full circuit as planned. This turned out to be a most fortuitous decision. On the way back to where we saw the Tree Pipit we had a very cautious young male Fallow Deer cross our path, after giving us a long hard stare. The sun was all but down by now and a stunning “end of the world” sunset was ablaze on the horizon.

Back at Tree Pipit corner we paused, enjoying the sounds of the forest and coming to terms with the fact that this was another trip without any clear sighting of the Wild Boar. As we stood and listened the first of the evening’s Woodcock appeared, making their unique squeak and honk call as they flew directly over us, then around the area where we were. We counted around half a dozen Woodcock in around ten minutes but there is a good chance we were possibly seeing the same few birds maintaining their territory. We had possible faint churrs that could have been Nightjars too but nothing long or clear enough to confirm.

Mrs Sausage then whispered to me that she had boar! We stood as still and as silent as we could and watched four large boar cross the path from where we had come, less than a hundred meters away from us. They then became aware of our presence, paused, looked down the path at us (I would guess that they were picking up scent more than sighting). The party scutttled back across the path from whence they had come. We were very impressed with just how fast and fairly quietly over 40kg of solid boar can move through the forests undergrowth. Boar at last, and close too! We made our way back to the stoneworks very happy with our night walk. With Woodcock continuing to appear overhead and good numbers of bats twisting and turning incredibly close around us, it served as a reminder that the forest is as much alive at night as it is during the day. With all we had seen and experienced it has to go down as one of our best days of wildlife watching.

Monday morning saw us pay a quick visit to Woorgreens Nature Reserve before heading back to London. We were still hoping to find a Redstart and Wood Warbler but the high of Sunday was going to be hard to beat. Conditions were overcast but fairly warm and we managed to find see Canada Geese, Tufted Ducks and Mute Swans on Woorgreens Lake. Mrs Sausage managed a close encounter with this Willow Warbler too.

There were good numbers of Meadow Pipits on the approach to Crabtree Hill as well.

Of course, there was no lack of the regular suspects either, this Great Tit obliged to pose just as we were loading up the car ready to make for the M4.

We lucked out on Redstarts and Wood Warbler this time, but we did have our first Cuckoo of the year calling several times before disappearing west. Our final sighting of a quite superb weekend was a tick, that had attached itself with some affection to my forearm. We had plenty of memories to take away from the Forest Of Dean, there was certainly no need for the forest to come with us! We have had two fantastic trips to the forest this year, each visit brings something new or interesting to see in this fantastic part of the world. We will be back again for sure.