Although we are now back in autumnal London, we are still blogging with fond memories of our Singapore trip. This particular entry is one tinged with a degree of melancholy and despondence though. It was only a few days after arriving home that we both read, with very heavy hearts, the news that applications are now open and were rapidly being taken up for the overpriced new development that has been planned for Bidadari. The dark clouds of urbanisation that have been looming are now well overhead, and the inevitable demolition of this avian oasis will begin in the coming months. This entry thus represents, in all likelihood, the last little bit of indulgence we will have with our favourite Singapore birding spot. It was a spectacular day, so at least the memories will be sweet.

The afternoon of Saturday 7th November saw us make the familiar journey to Bida once again, entering from the path near Woodleigh MRT. The Facebook groups had been abuzz with sightings since our last visit and with less than a week of our stay in Singapore remaining, another visit was a no brainer. Our first sighting was of a Black Baza flying towards Woodleigh Park, a prized first for both of us, after three years of trying. Although no pictures were taken, we were both over the moon at the sighting, and took it as a positive omen of things to come. Surprisingly though, we found the main area of Bida apparently abandoned, no long lenses and tripods to be seen. Had we missed the weekend rush? We didn’t stop to ponder the lack of people for too long though, a dark cuckoo quickly took our attention as it flitted from one low branch to another. 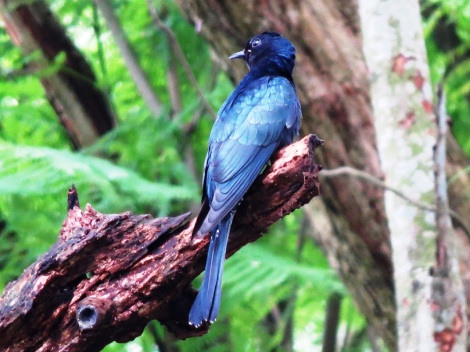 We initially thought we had a Crow-billed Drongo, but this was actually a Square-tailed Drongo Cuckoo (confirmed by a friendly fellow birder later during our visit). It didn’t stay still for too long and any small approach for a clearer shot saw this dark bird move a little further away. 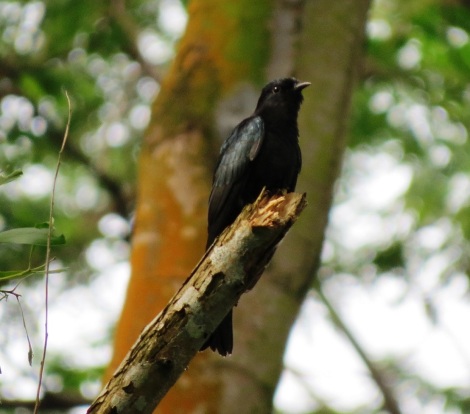 As we were trying to get some clean shots of a very active Asian Brown Flycatcher, a familiar figure was moving in our direction. It was good to see Lim Kim Keang from the Singapore Bird Group again. We last crossed paths last year at Pasir Ris Park and his appearance at Bidadari was for a good reason as there were two interesting kingfishers on-site. We had seen the posts but the absence of birders on our arrival had led us to think we may have arrived too late to see them. Kim Keang however pointed us in the right direction. It was soon apparent where the bird paparazzi had got to. In a far corner of Bidadari, there was the kind of long lens activity usually seen at red-carpet premiers and fashion shoots. There was crowd of around 30-40 people gathered around some low hanging branches and bushes, the majority of them with tripods and high powered long lenses. The reason for all the attention was this small but very colourful Oriental Dwarf Kingfisher. 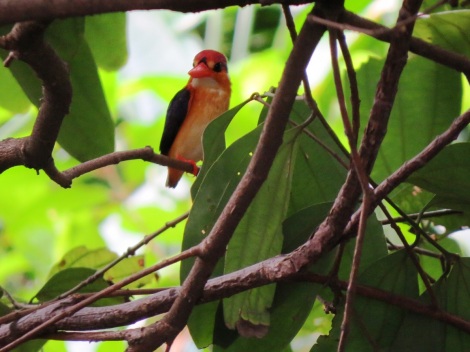 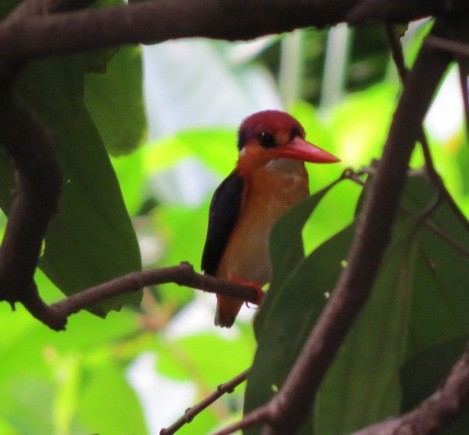 Our pics aren’t the greatest and I don’t think really do justice to this stunning bird. The Oriental Dwarf Kingfisher, also known as the Black-backed Kingfisher or Three-toed Kingfisher is a rare winter migrant to Singapore, hence the intense interest in its presence at Bida. As the name suggests, it is one of the smaller kingfishers at only 13cm in length, but has a wonderful plumage that has to be enjoyed from different angles. 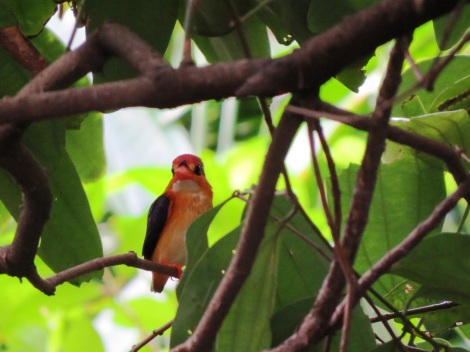 We struggled for a position to get some record shots and even considering the bird was only sat a matter of metres away just inside the greenery, we couldn’t really compete with all the photographic bazookas present. 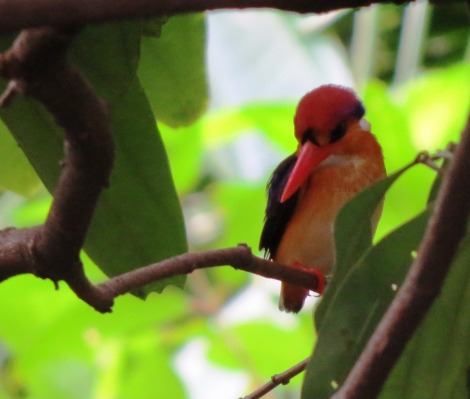 We have come to learn that there is a difference between birders and photographers, and in Singapore the balance seems to be heavily on photographers. The need for the perfect shot sometimes seems to outweigh not only the pleasure in seeing the bird but on occasions it infringes on the bird itself.  We have seen deliberate attempts to make birds move and a general lack of patience in letting the animals come out to the open naturally. This was very noticeable as we moved on to try and see Bida’s second scarce kingfisher, the Ruddy Kingfisher. 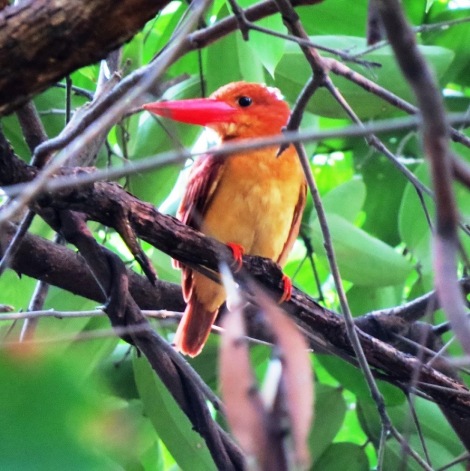 Less than a minute’s walk from the Oriental Dwarf location was a smaller group of birders and photographers with eyes and cameras elevated. This was the Ruddy Kingfisher’s location. It was sat halfway up a tree and slightly obscured, although some careful angles allowed some record shots without disturbing it. 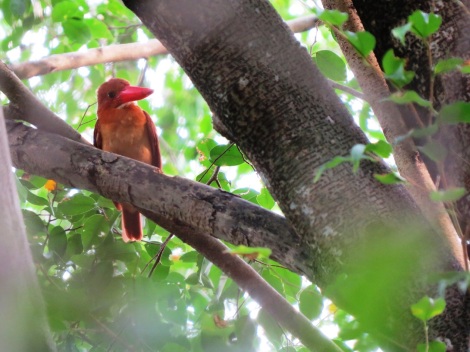 There were some present who felt the need to get real up close and personal though, standing right under the tree and even using flash to get that ever so important perfect shot. As one more seasoned and passionate birder, Mui Hong, said to us – ‘just be patient, it will move soon’. Having watched the bird for some time, she had seen it make regular movements between favoured trees and it was only a matter of waiting and letting the bird do what came naturally. Sadly this was not enough for some. We stood back and waited. Sure enough, the Ruddy made a very short flight to a branch that offered a much better view. 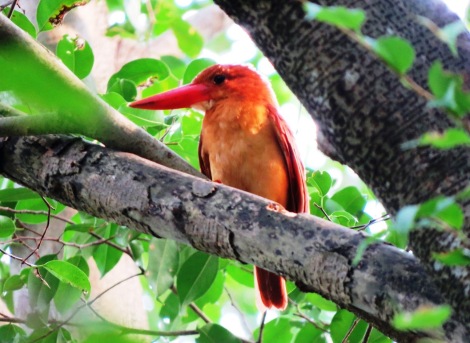 The Ruddy is a regular migrant, stopping at Bidadari annually but only ever for a short time for a rest and refuel. Over twice the size of the Oriental Dwarf, it is a lovely rusty orange mix with a strong stork-like bill. We wonder where else other than Bidadari these birds might go during their migrations henceforth. We managed some record shots between us before moving back into Bidadari to see what else was around.

On the non-bird front Mrs Sausage found some photogenic fungi: 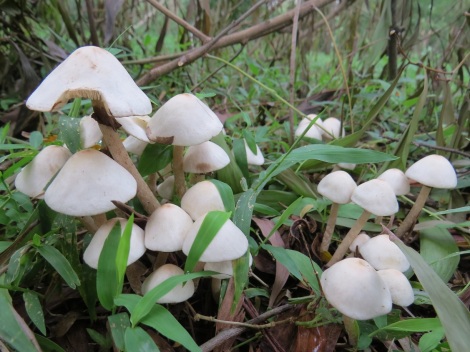 She also found some unknown animal droppings. My first guess was Civet Cat as we know there is at least one family at Bidadari. If there are any excrement experts reading, we would love your views. 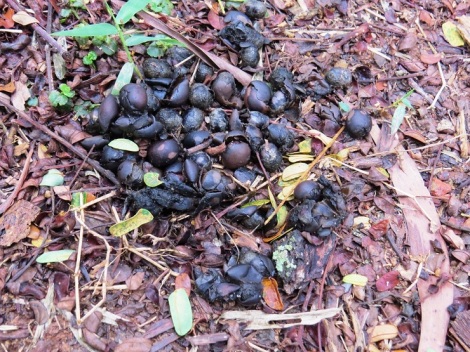 I also finally managed to get some clear shots of a Brown-chested Jungle Flycatcher for this trip too, and in rapidly failing light. 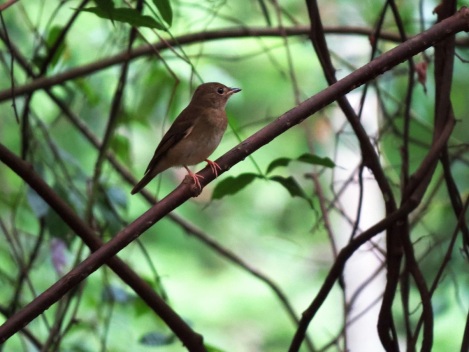 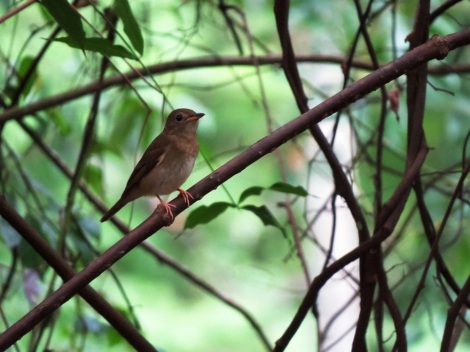 Team Sausage then split up as I went waiting for a male Tiger Shrike that was refusing to come out of some twiggy cover. 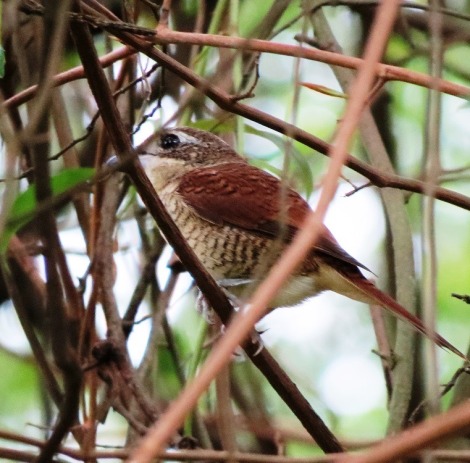 Mrs Sausage had some better results as she was able to reel off a good few shots of the Square-tailed Drongo Cuckoo that we had seen on arrival at Bida. She was also lucky to watch the bird catching a fat, tasty little green grub for an early dinner snack. 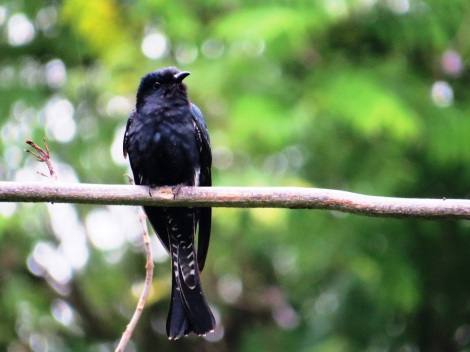 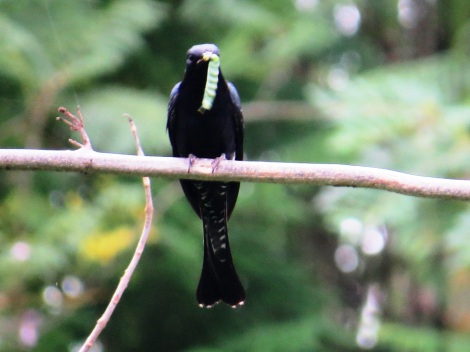 A very, very good afternoon at Bidadari with two new birds to add to our life lists. Sadly, it is rewarding times such as these that make the impending future of Bidadari all that more depressing. We have seen birds here that it is unlikely we would have seen anywhere else in Singapore and have made acquaintances with other birders thanks to Bida’s unique appeal to both migrant and local species. The sightings are coming in almost daily on the various Facebook pages. There is certainly no need to tell any of the Singapore birding community to enjoy Bidadari while it is still there, they more than us will miss this little piece of paradise terribly.