Our second day of exploring the North Berwick beaches was starkly different to our first. Where Wednesday was full of beautiful blue skies and sunshine, Friday was a squally, damp affair. Wednesday’s shirtsleeves gave way to waterproofs. Undeterred though, we made our way to the iron walkways around the Seabird Centre to take a look at what could be sheltering from the unfriendly elements.

Our first proper viewing point brought us a very healthy mixture of Redshanks and Turnstones. 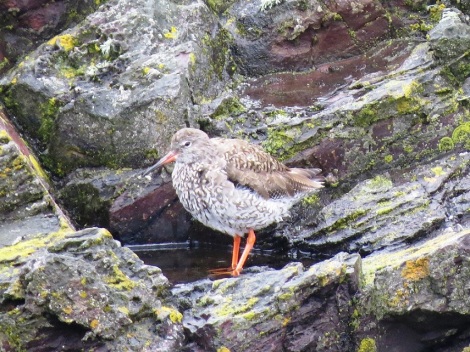 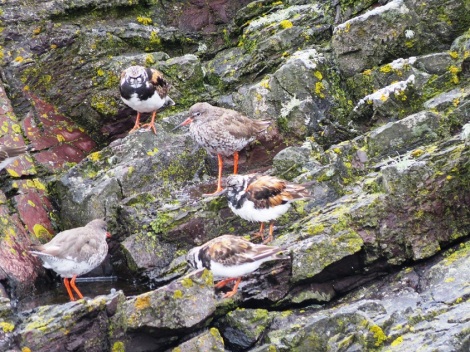 This Juvenile Herring Gull was also taking some respite from the blustery elements.

Several other rocky outcrops were providing shelter to more Turnstones and Redshanks.

Closer scanning of these wader populations also revealed a small number of Purple Sandpipers hiding away in a crevices. The rain was quite heavy by this stage and a thin mist was making photography difficult so these aren’t the best of images. 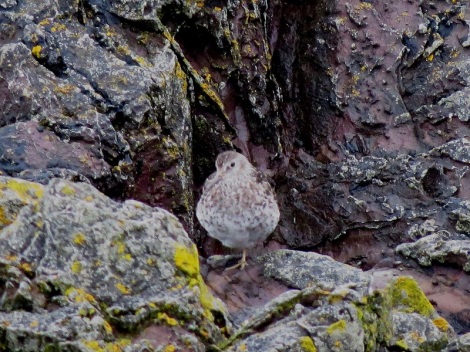 Even the normally imposing Berwick Law was obscured by the low cloud.

We decided to seek shelter at the North Berwick Food Festival until conditions abated. When the rain did finally ease off, we made for the beach to continue our exploring. It was late-afternoon by this stage and once again, the tide was out, leaving behind more unfortunate jellyfish. Along with the ubiquitous Lion’s Mane, we also found a few Purple Jellyfish.

As afternoon turned to early evening, a faint amber and golden sunset attempted to break through the still grey clouds above.

As this ethereal half light bathed the shoreline, numerous waders and gulls began to appear. Some were foraging the soft sand for food while others seemed to be enjoying the calm now the rain and wind had passed. Oystercatchers are never in short supply on our visits to Scotland.

It was only while scanning some exposed seaweed clusters that I spotted some mottled movement. Exploring the rock pools and delving into the twisted green knots of seaweed was a Curlew.

There were a good four or five Curlews further out of camera range, all of them quite mobile and energetically searching the soft sand and exposed seaweed for food sources. No less mobile but somewhat closer to where we were exploring were dozens of Pied Wagtail. Occasionally rock-hopping but mostly sticking to the soft dry sand that remained untouched by the sea. 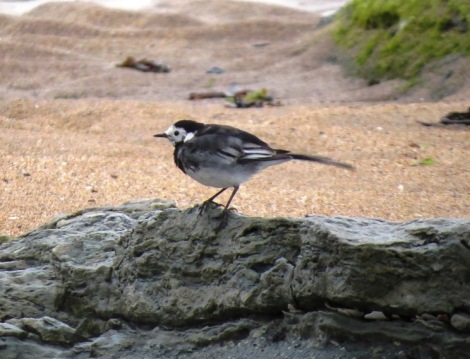 Our walk on Wednesday afternoon brought us an abundance of Common Terns expertly diving into the sea. We had a few appear again as the evening drew in. It was while watching these graceful seabirds that I spotted a slightly different Tern emerge from the grey and land on a rock still half submerged in the sea. The red bill of the Common Tern was missing, replaced with a yellowy black one instead – it was a Sandwich Tern. Even with the tide out I had to walk some distance to get close enough for a record shot though. 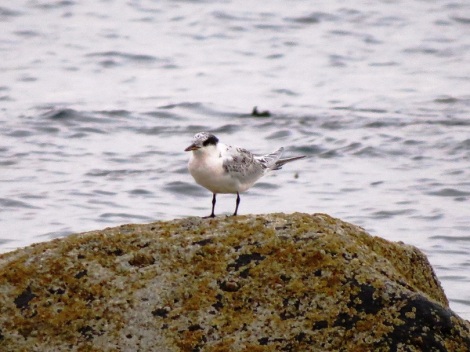 Of course, no shoreline stroll would be complete without observing some of the more common species. As the gulls are so fearless they do offer themselves up for camera fodder. Here we have Herring, Black-headed and Lesser Black-backed Gulls.

Despite some difficult weather, our second sortie around the shoreline of North Berwick was very rewarding. A decent variety of bird life, more interesting but sadly stranded jellyfish and a calming, diaphanous sunset to close our North Berwick adventure. A fitting end to a most enjoyable stay. The laughs and the entertainment may have been in Edinburgh but the days we dedicated to exploring our temporary home left us with no regrets about missing a few days of Fringe.