4th July saw Team Sausage in central London. For all intents and purposes, we were on a friends, food and film outing. Yet, we managed to find an hour or so to have a quick look around St James’s Park by Buckingham Palace.

London’s parks are intriguing places – oases of greenery wedged between the glass and concrete of the heaving city, yet one can rarely shake off the feeling of artificiality. Nonetheless, I have blogged about Kensington Gardens numerous times, and all the parks are home to something interesting at different times of the year. St James’s Park is no exception and like many manicured and maintained parks up and down the land, they have some exotic captive species within them.

This White-cheeked or Bahama Pintail is one such example. 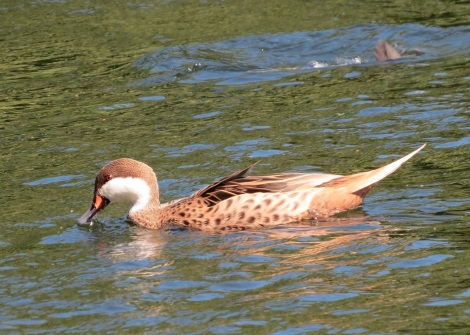 Other captive species were Red-breasted and Bar Headed Geese. 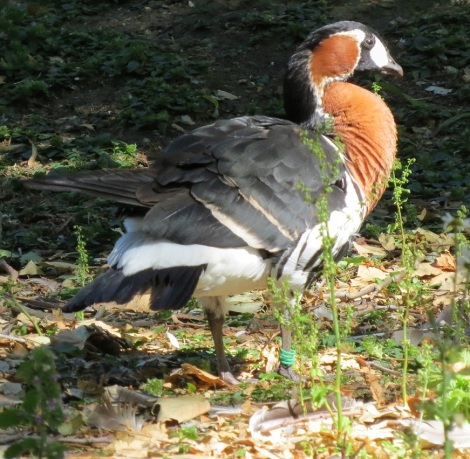 And on the duck front were the Fulvous Whistling Ducks and this long range Ruddy Duck. The Ruddy has been classified as an invasive species, and a government-led initiative has drastically reduced UK numbers.

Somewhat more contentious on the captive or wild category were the Egyptian Geese, Barnacle Goose and Red Crested Pochards.

The Red Crested Pochard was already in eclipse plumage (shedding its brighter pre-breeding feathers for a duller, less obvious appearance). There were also a fair few Shelduck around the water. Again, I am not sure if these were visitors or captive. Certainly, wild Shelduck have been seen on several of our earlier excursions this year; as far away as Aberdeenshire and Minsmere. 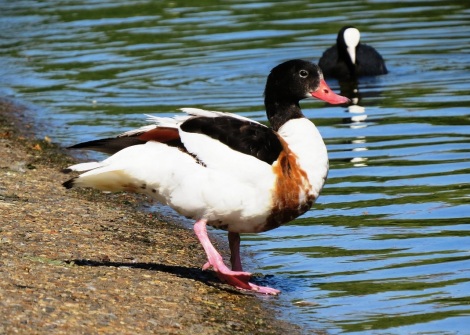 Among the genuine wild birds were of course the usual feral pigeons, Herring and Black-headed Gulls, Coots, Mallards and Moor Hens. Joining the resident and most definitely captive Great White Pelicans on their rocky island were a few Cormorants.

However, displaying the most wild behaviour of all was a particular Grey Heron. We had already spotted a few at the side of the water in their usual statue like poses.

What caught our eye was one particular heron making its way from the water to the relative shelter of the bankside trees. It was creating quite a commotion among some of the other birds nearby, and the reason for this became clear with a closer look. 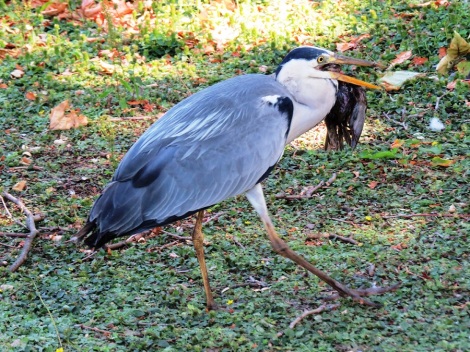 It was making off with a very fresh and still alive kill. Once in some cover it then proceeded to try and drown the still struggling victim.

It was quite hard to make out what the unfortunate quarry was, but it was clearly a bird of some kind. The banks were full of young Coot and Moorhens but my first impression was that this could well be a Starling. This picture seems to suggests I may have been correct.

Following the drowning the struggle seemed over but the Heron was clearly trying to now figure out how to consume this feathery feast.

This was clearly too big for the Heron to consume as it would the usual small or medium sized fish. The technique of flipping the fish around and swallowing whole in one swift movement was not going to be achievable with a sodden Starling. After much twisting and turning of the head and neck the Heron actually managed, quite to our surprise, to swallow the dead bird whole. The crop of the Heron can be quite clearly seen in this picture as the prey makes the journey down the long neck.

All this, on a bright sunny day, surrounded by tourists among the immaculately kept grounds of St James’s Park was a reminder that the realities of nature continue all the time, even if it almost seemed out of place in such bustling and manufactured grounds.