After two weekends of cross-country birding, it was time to spend a bit of time catching up on the local action. Monday 1st June was a long overdue day off for me and with a few hours to kill, it made perfect sense to spend some time at Cranford Park.

I have to admit that things were not as noisy as I had hoped for. Busy Blackbirds and Robins were showing well and the occasional alarm call from a Blackcap could be heard as I made my way into the woodland. Blue Tits were probably the most numerous of sightings with Chiffchaff a close second. With conditions overcast but the temperature reasonable, there was no shortage of insect action too, and my first Speckled Wood butterfly of the year put in an appearance.

Dominating the air within the woodland however were loads of Longhorn Moths. I think I spent a fair part of my walk through the woods gently waving these long antennaed Lepidoptera from my face.

Both Green and Great Spotted Woodpeckers could be heard and briefly seen, but most tree holes seemed to have been occupied by Jackdaws. Long-tailed Tits and Wren were also seen in the woodland area along with an occasional Dunnock and the ever present Parakeets. The meadows of the park were sporadically busy with shy Whitethroat and a few Goldfinch zipping across the open grassland. There was neither sight not sound of any Skylark. Only the Meadow Pipits were putting in any kind of appearance and this youngster was very obliging. 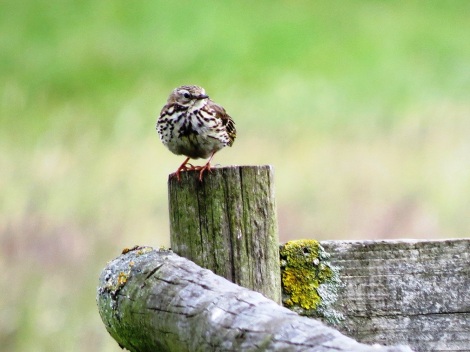 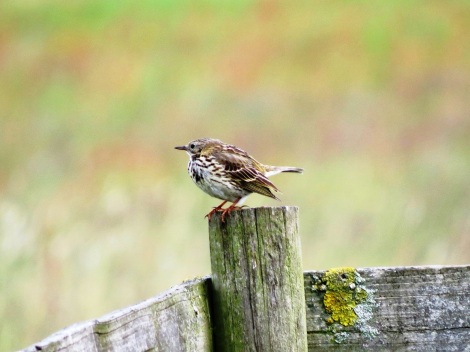 The River Crane saw a long Grey Heron hunting and a single Kestrel over the Meadows. This female Orange Tip proved elusive to the camera but the final shot has something of an arty look to it so I’ve decided to throw it in!

With Mrs Sausage out at a conference on Saturday morning and some proper summer weather, I made a beeline for Staines Moor. Sightings here had been mixed over the week but there always seems to be something to see on the Moor and a free morning was too good to waste!

The walk down to Stanwell Moor brought Greenfinch, Goldfinch, hidden Goldcrest, a low-level Common Buzzard and this House Sparrow.

Having negotiated some very overgrown nettles, thistles and brambles, Stanwell Moor was awash with white fluffy Salicaceae seeds. A summer snowfall of light, wispy parachutes floating on the breeze. The seeds were sticking to anything and everything, including yours truly. You can just about pick them up on this picture of a singing Whitethroat. 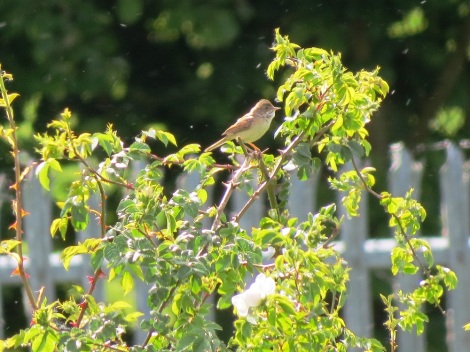 The overgrowth of green foliage on Stanwell Moor was such that I expected to hear cries of help from lost birders any minute! Nettles and greenery over head height did make spotting insects and butterflies quite easy though, and my first Green-veined White butterfly of the year was spotted at eye level!

As I moved onto Staines Moor, I met the very affable Robert Martin. Being fairly new to birding on the moor, it was good to glean some knowledge from a regular. A Common Tern was giving fantastic views as it hunted along the Colne and I could have stood and watched this elegant bird all day long.

Flying back and forth, hovering then plunging into the river on regular occasions it was a lovely sight to behold. 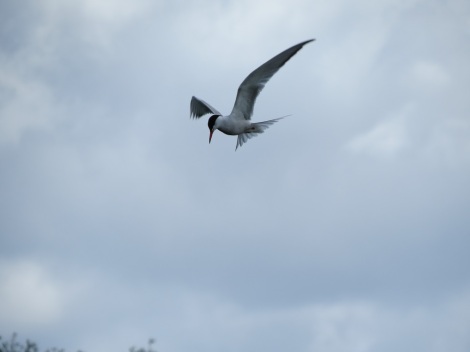 I was also lucky enough to finally get some clear views of the very vocal Reed Warbler I have been hearing on recent visits. Despite the breeze it remained in the open just long enough to get focus and steal a few shots. 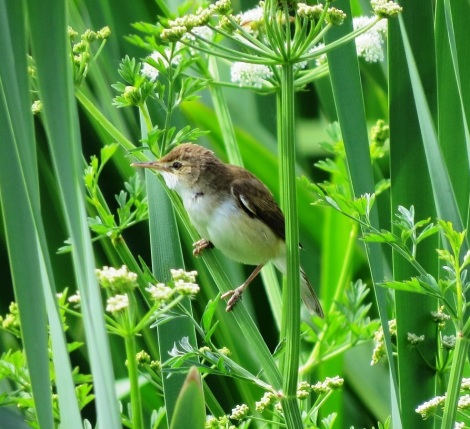 I went from the obvious to the elusive in a few moments though as this Common Blue butterfly weaved a path at my feet. However, the closer I got to it with the camera, the lower and lower it descended lower into the grass, before hugging the depths and taking flight. So much for unobstructured views!

A noisy Green Woodpecker was moving across the north east section of the moor and seemed to be everywhere I went in that section, but it was staying grounded almost the whole time and didn’t show for a clear shot. This Kestrel was far more accommodating, resting on the bridge over the Colne just long enough for a few mid-range shots.

Raptor activity continued with a Red Kite over briefly before heading towards the reservoirs. As I made my way around Whitethroat, Goldfinch and Linnet were all spotted. This Linnet was perching helpfully in the open.

My walk back through the jungle of Stanwell Moor also offered the opportunity to get this Banded Demoiselle sitting at head height.

Sighting of the day however was this Little Owl in the horse paddock. Thanks to a heads up from Dominic Pia on Twitter! A short scan of the posts in the paddock brought a quick reward and my first Little Owl of the year!

Having regaled Mrs Sausage of the wonders of the Moor on Saturday she insisted we return again on Sunday afternoon. Who was I to argue? Sunday was a far more leisurely affair than Saturday morning though, as we ambled our way around. I was hoping the warm afternoon weather would have seen the return of some hunting Hobbys but no such luck.

There were a pair of Common Terns hunting at opposite ends of the Colne and we saw two different Kestrels on the open Moor too.

There were also three Redshank on the moor. A lone individual was in the same location I saw it several weeks ago but there was pair of these waders near the Colne displaying very territorial behaviour and taking to the air with great regularity.

We approached their general location whilst maintaining a good distance and they were up in no time, calling out repeatedly. They were joined by an equally agitated Lapwing that was sharing the same patch of ground.

We circled around the spot, not wanting to disturb them or cause more distress. Amongst the Redshank and Lapwing alarm calls we were able to pick out a faint calling of what sounded like young. A scan of the area didn’t come up with anything but the noise was audible.

We moved on, following the Colne and leaving the possible parents to their brooding. A Grey Heron and a Cormorant were fishing on the river, the Kestrels maintained their presence over the moor and flocks of young Starling would frequently break from the cover of the long grass and relocate to another patch.

The resident cows and horses had all congregated in the same part of the moor. There were two foals with the herd now and one took quite a liking to Mrs Sausage, following her over one of the wooden bridges. Mum then approached, nudging her youngster and saying hello to Mrs Sausage at the same time. We also managed to snap these two sharing a tender moment. 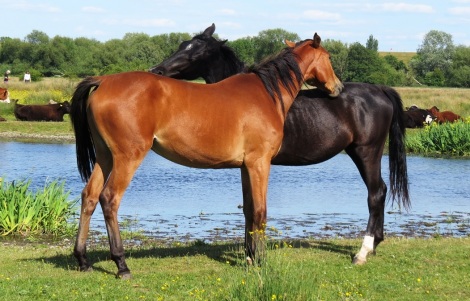 Also coming across our path was this Hook-streak Grass Veneer moth (Crambus lathoniellus), which obligingly allowed us to pick it up for a closer look.

Possibly the most dominant bird during our visit in terms of sound and visibility were the Meadow Pipits. The afternoon was constantly full of rising, calling and parachuting Mippits. They probably outnumbered Skylarks by around five to one. Occasionally one would pause atop some greenery for a picture. 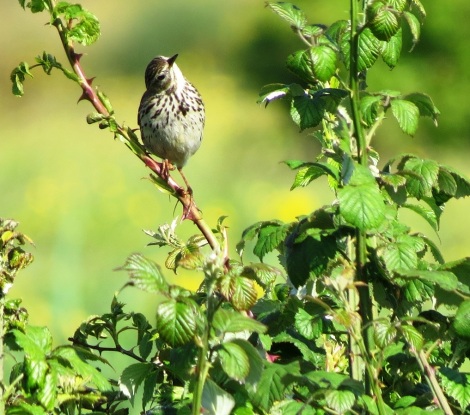 The Reed Warbler showed again briefly, in almost the same location as Saturday but this time in the branches above the reeds.

I think we can hopefully predict some Peacock butterflies will appear in the area soon as well. These Peacock caterpillars were gorging away on some of the ubiquitous nettles.

We stopped off at the horse paddock on our way back as Mrs Sausage was keen to see the Little Owl. A scan along the posts proved owl free though and we were all for calling it a day when I realised the Little Owl was perched on an outer branch a lot closer to where we were standing. 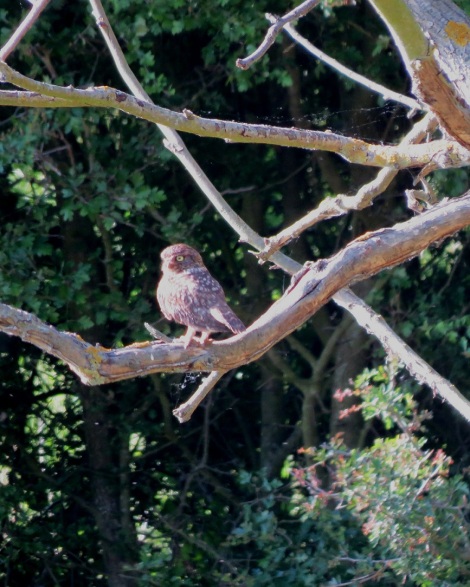 The sunlight was right on the spot too so I have had to darken the images quite a bit to get some clear resolution. There is something quite enigmatic about Little Owls, they always seem to make eye contact with you with those yellow staring orbs. 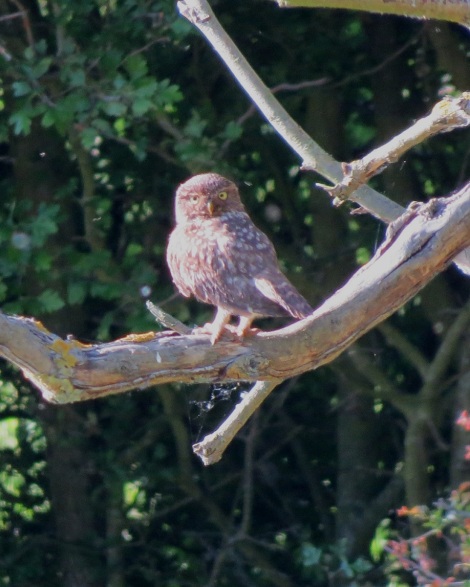 The Little Owl was a super conclusion to three days of birding on our own doorstep. We have been very lucky that both the long drives and the short ones have brought their rewards with both feathered and other wildlife. Where to next?

3 responses to “All Creatures Great And Local”