Back again with another two week summary of birding bits and avian adventures! We begin at Staines Moor on the afternoon of Sunday 17th May.

Despite the lovely spring weather and a fresh but friendly breeze on the moor, we were the only two people there for quite some time. The regular feathered suspects were all present though – Goldfinches, elusive Cettis, busy Tits, Wrens and Chiffchaffs, invisible Sedge Warbler and melodious Blackcaps and Whitethroats. A Greenfinch pair were both carrying nesting material from branch to branch as we entered the Moor, pausing kindly for us to take a quick pic before proceeding.

Outnumbering the busy birds by some number though were the insects. Most numerous of all were the Mayflies.

Staines Moor itself saw plenty of aerial activity during our visit. At least three Hobbies were hunting across the border with Stanwell Moor and two Kestrels were sharing the sky with them. We could have sat and watched them all afternoon. A solitary and very jumpy Redshank was hanging around the Colne and was later joined by a Grey Heron. Two Cormorants took up temporary residence on a dead tree facing Stanwell Moor and seemed set for the afternoon. 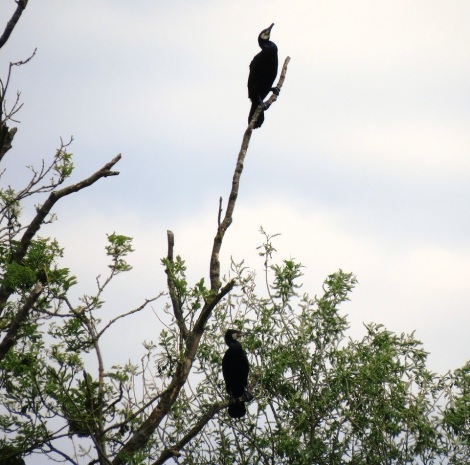 Bird highlight of the visit ocurred on Stanwell Moor as we were heading back. This huddling cluster of Long-tailed Tits were noisy but well hidden among the flourishing greenery.

I initially thought these may have been recent fledglings but have since read that the grouping together seen above is a species wide trait designed to save energy and maintain warmth. Any experts out there please feel free to leave a comment.

It was not exactly an intense day on Staines Moor but watching the Hobby show and the stalking the skittish Redshank whilst having most of the place to ourselves was a perfect way to spend the afternoon.

Our next adventure would be a little further afield at the RSPB flagship reserve of Minsmere. By 7am last Sunday Team Sausage were on the road and heading east, very east to Suffolk. We visited Minsmere last June and were both so impressed by the reserve and the wide range of life there that a spring visit on our wedding anniversary weekend was too tempting to resist. With a fair wind behind us we were pulling up into Minsmere’s car park by 9.45. Heavy rain had been forecast for 3pm onwards, so we wanted to make the most of the day.

Our first location was the Sand Martin burrows just by the cafe. Although not as busy as last June there was plenty of frantic activity as the Sand Martins made constant flights in and out of their burrows. I managed one lucky capture of this one before it jetted off on another sortie.

There were plenty of songbirds around as we made our way towards the North Wall. This Chaffinch was oblivious to our presence and perched almost above our heads.

A brief stop in the North Hide brought us some new sightings for our year with Avocets and Barnacle Geese. The lovely Avocets were nesting amid a young Greylag family and were dwarfed by the parents. This however did not stop the Avocets aggressively warning the Greylags off when they strayed too near to their nest. 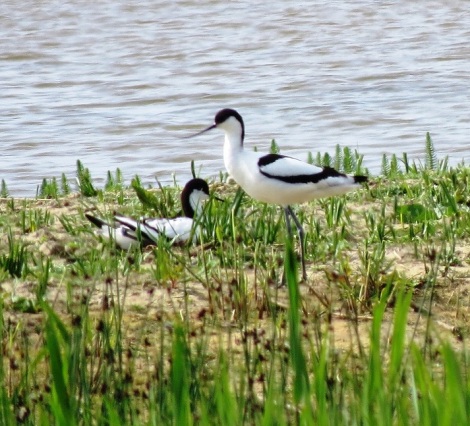 The North Wall was also home to new families of Greylag and Canada Geese.

The North Wall was bracketed on both side by some extensive reeds though and we were hoping to see the Bearded Tits that were currently residing at Minsmere. We were rewarded immediately with a stunning male breaking cover and climbing some reeds directly in front of us. Before I could focus the camera, he had flown across the path and into the opposite expanse of reeds. This was the pattern for the next twenty or so minutes; brief appearances followed by a flight and disappearance into the dense reeds. A strong breeze from the North Sea didn’t help either, swaying the thin reeds left and right and making pictures very hard to obtain. I’ve posted this fuzzy effort as a record shot only.

It’s easy to get frustrated and hung-up over imperfect photos and I’ve always tried to put the enjoyment and pleasure of bird watching before that of being a photographer. A brief gnashing of photographic teeth was soon overcome by the privilege of being able to watch these wonderful birds. It was a first for Mrs Sausage and my first male “beardies”, having had close encounters with females at Otmoor and Hyde Park in the past.

We moved on from the North Wall to the busy East Hide overlooking the Scrape. There was a lot of activity here, lots of Black-headed Gulls and a good sprinkling of Avocet, Redshank and Black-tailed Godwits. Herring and Lesser-black Backed Gulls were also occupying the exposed muddy mounds. Common Tern were in very good numbers and could be seen hovering and diving for food right across the scrape. I made the most of a Shelduck in close proximity to the hide.

The RSPB volunteers in the this hide were really helpful, constantly pointing out interesting sightings and we benefited from this with the spotting of two Little Tern at the back of the Scrape. Much smaller than the seemingly ubiquitous Common Tern and given away by their yellow bills, they were hunkered down on the bank in the distance, looking quite innocuous. 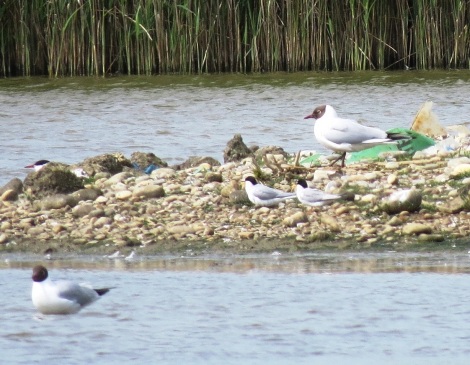 A new bird for both of us was then spotted, just about anyway. Appearing then disappearing with great regularity was a slender, tiny Red-necked Phalarope. A bird so small and so far away any attempt at a picture would have merely resulted in a white smear. One for the digiscopers only I think. It brings me back to my earlier comment though, we were both thrilled to have seen this fairly rare visitor, a picture would have been a bonus but not essential to the fantastic experience.

We lunched on the beach just behind the East Hide, watching Common Terns diving just in front of us and Sand Martins zipping past at below head height. We were joined briefly by this Small Copper butterfly. 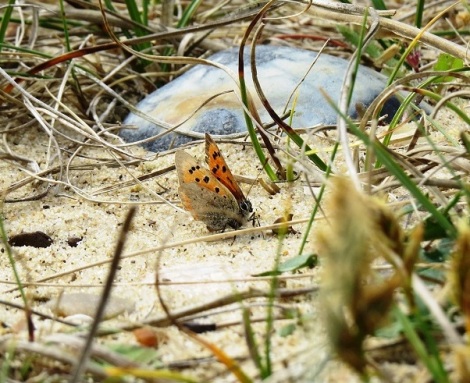 Mrs Sausage was also very intrigued by this piece of sand dune flora. The leaves had a distinctly rubbery,waterproof texture. Any beach-combing botanists out there please comment and tell us what this is.

Our walk back along the North Wall was made all the better by hearing a long and very audible Bittern boom. Quite appropriate as our next location was the Bittern Hide. Just as we arrived outside the hide we had the briefest of flypasts from one of these secretive waders. Up in the hide there was quite a crowd scene and understandably so. Despite the name though, there was far more than just Bitterns to observe from here. Most active and very visible were three or four hunting Hobby and two Marsh Harriers. The majestic and elegant Marsh Harriers were at something of a distance at the far end of the huge reed bed. We were fortunate though that one Hobby chose to take a break from plucking insects from the Suffolk sky to perch adjacent to the hide and just about close enough for a few portraits.

Rain clouds had begun to gather, pretty much as forecast, but we were prepared for the imminent downpour and were not going to let a bit of rain send us home early. Reward for bringing our waterproof coats came in quick time too as we joined a small cluster of enthusiastic visitors seemingly all gathered round a pile of leaves and hawthorn branches. Thankfully an RSPB volunteer was on hand to advise that the cause of interest was a young female Adder. Necks craned and leaf by leaf directions given it was just possible to see some ochre and dark brown jagged markings among the leaf litter. Scanning further along and an unblinking and very still red eye came into view.

With a steady rain beginning to fall and a discernible drop in temperature the chances of the Adder breaking cover were unlikely so we took what picture we could of this wonderful reptile. 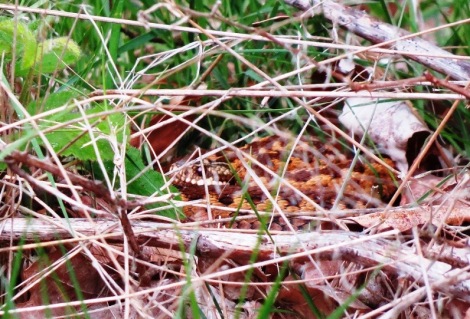 In between snake shots I also managed to get this Common Blue Damselfly before we made for the shelter of the Island Mere Hide as the rain started to fall ever more heavy.

Island Mere had become something of a shelter for many visitors and staff, but it did offer some views of a Marsh Harrier taking shelter in a tree toward the back of the reeds, some hardy Cormorants utterly un-fazed by the Suffolk soaking, and the odd fleeting glance of Reed Warbler and Reed Bunting. As the deluge abated somewhat we made our way back into the drizzle and appropriately enough, in weather only a duck would love, spotted this handsome Gadwall.

Our final trek of the day brought us to the South Hide. It was hustle and bustle on the bird front here too, with more wading Avocets and hovering Common Tern the most numerous of the species seen.

From the South Hide we could just about see two Little Gull hunkered down at the back of the Scrape. This was a lifer for both of us, A careful scan with the binoculars could just about pick out a darker head than the nearby and very numerous Black-headed Gulls. On our way out, we did also spot a rare Martin Hughes-Games. The Springwatch technical team had been busy across the reserve all day, laying cables and planning for the new series.

We refreshed ourselves at the RSPB cafe with a sausage sandwich whilst watching the Sand Martins continuing their constant activity. Greenfinch, Chaffinch, Great Tit and Great Spotted Woodpecker were on the feeders and Dunnocks almost around our feet while a noisy male Pheasant strutted across the eating area as if he owned the place.

A cracking day and well worth the early start, getting rained on and the long-ish journey home. Minsmere really did deliver everything we had hoped for, and more. This was our second visit and fingers crossed, we hope to be back again before the peak birding season is over. A few life ticks, some very good year ticks, and just under 60 species, all crammed into our six and a half hour visit. What more could any nerdy birdies ask for!

One response to “Little Things Mean A Lot”