Saturday 18th October saw us start our day with an early morning appearance at Chinese and Japanese Garden. We were following up our fairly successful visit from the previous weekend and recent sightings reported in the week had included a Peregrine Falcon and Crested Serpent Eagle. We came in at Chinese Garden and could see plenty of long-lens photographers and birders stalking the grounds looking for feathered targets.

A female Pink-necked Green Pigeon was the first sighting of the day. This was quickly followed by a male and female Common Flameback, chasing each other from tree to tree. 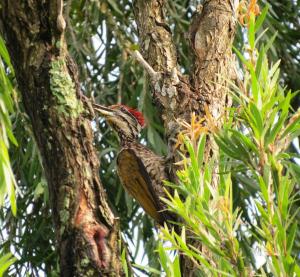 A congregation of tripod bearing birders were gathered at the Peregrine site but the word on the grass was that there had been no sign of this exciting raptor today. With a blisteringly hot sun starting to beat down we decided to move on into Japanese Garden.Our journey was slightly delayed as we luckily spotted this Brown Shrike posing quite openly atop a park building. I just had time to get this one shot off before the bird was gone.

The large pond at Japanese Garden was occupied with some very large birds. For once, the Grey Herons were out-sized by Milky Storks. 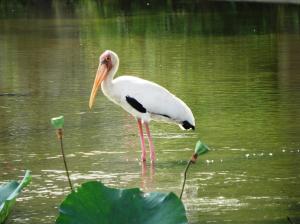 Completely uninterested in the human activity around them, they were excellent camera fodder.

We paused momentarily to snap this Common Mynah on the small red footbridge before exploring some of the larger trees, Mrs Sausage having seen some movement in the upper branches. 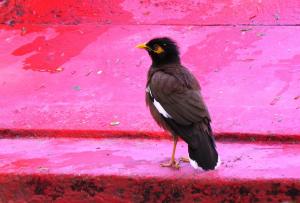 We were quite excited to find three Pied Imperial Pigeons nestling at the penthouse level of the tree. They were largely obscured by leaves and branches but one decided to accommodate us, albeit momentarily.

Of course, it would have been remiss of us not to take another look at the Large-tailed Nightjar which was still in situ. It took a few moments to locate it again, the Nightjar really is a true master of camouflage. Try and locate the bird in this picture: 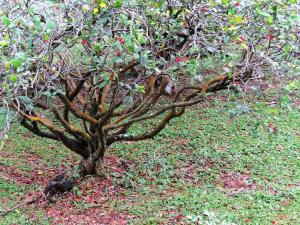 And here it is in wonderful technicolour.

We were very surprised to see that the bird was still in exactly the same place from when we visited around a week earlier. All would be revealed just before we left Singapore. Apparently, the Nightjar was on eggs, which have now successfully hatched. There are several videos that have been posted up by other birders of the Nightjar with its chicks. Jeremiah Loei, a Singaporean birder and nature enthusiast has kindly allowed us to use his excellent footage of the chicks and parent.

Please also check out Jeremiah’s excellent Facebook page which is full of excellent images and info on the wildlife that can be found in Singapore and the surrounding region.

We decided to leave the Nightjar in peace and explore some more of Japanese Garden. It wasn’t long before our attention was taking by a very large, buzzing, airborne flash of colour. Yellow and red and sounding like Watto from Star Wars was this incredibly large grasshopper.

We have struggled to find a positive id on the internet, other than it is a kind of short-horned grasshopper. Any Singapore insect experts out there please feel free to leave a comment if you know what it is. The grasshopper also attracted the attention of a very agile swallow skimming the nearby waters. The presence of the tasty-looking grasshopper probably made the swallow quite bold, and at times, we could hear its wingbeats!

Avian action was back on the agenda next as we joined another birder scanning some high branches for a very shy and skittish bird. The target this time was this Arctic Warbler.

Like nearly every other warbler it was very elusive, almost nondescript in appearance and very, very similar to a whole load of other warblers. It doesn’t matter where in the world you go, it seems that all warblers look alike, especially when they are over 10ft above you among leaves and branches!

Any birding trip would not be complete without at least one sighting of the ubiquitous Collared Kingfisher of course, especially when they let you get close enough for these shots.

We noticed a cluster of tripods and big cameras around some trees as we made our way around and when we asked what was capturing their attention we enthusiastically joined them. Exceedingly mobile and a migrant visitor to Singapore, we had a female Asian Paradise Flycatcher. It rarely seemed to settle on any exposed perch so the first shots we got were only partial views.

Persistence paid off however, and after dancing under and around the trees like characters in a Bollywood movie we finally had a few clear shots of this rufous and ash coloured bird. Highlight of the day by some distance! 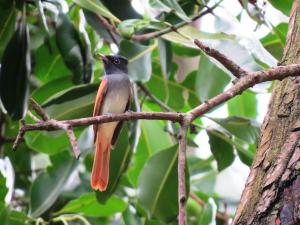 Once again, we were grateful for the generous sharing of info by the resident Singapore birders and photographers. Without whom, some of our sightings and ids would have been much, much harder.

Please click on the images for larger views and check our Flickr page for un-compressed images of these and more.

2 responses to “A Glimpse Of Paradise”