Definitely a weekend of contrasting days with regards to the weather. My Saturday visit to Cranford Park was brought to an abrupt end with a heavy downpour late morning. I arrived in bright sunshine and things were very similar to last week. Robin and Wren were vocal with the former quite visible too.

The Parakeets were maintaining their noisy presence as well and I should have heeded the warning signs when taking these pictures of the noisy green critters. The sky was rapidly darkening and as I left the woodland for the open meadows an enormous dark, low cloud was ominously descending across the park. 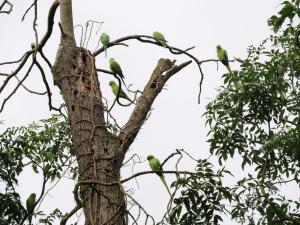 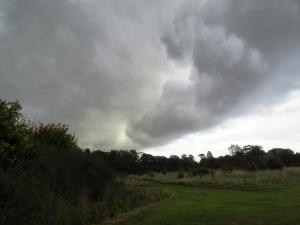 I headed down to the bottom of the meadow to see if either Stonechat, Whinchat or Meadow Pipit would be showing. Sensibly, they were probably hiding from the imminent deluge and all was quiet. A Sparrowhawk was being mobbed by Crows just over the houses in Cranford Lane and as I watched this scene disappear behind the trees, I realised how far I was from the car park considering the doom and gloom above me. I hoped Sunday would bring better conditions.

And lo Sunday did come, and the park was swathed in sunshine. With the temperature showing a cool 7 degrees and a ground frost being visibly burned off the grass, it was a gentle reminder that our Indian Summer would soon be over. A day to make the most of things, I thought. 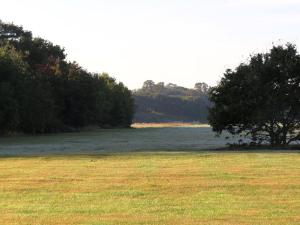 Autumnal activity was the theme today, the Jays were maintaining their high profile across the meadows and Grey Squirrels were everywhere; on the ground, scurrying up tree-trunks, hopping from branch to branch above and beside me. The clock was clearly ticking for those creatures that hoard their winter sustenance.

The bottom of the meadow is the place for all things interesting at the moment and yet again it bore feathered fruit today. At least four Meadow Pipits were moving from point to point, flighty and un-settled, Skylarks churred over-head and a single Whinchat topped exposed branches. 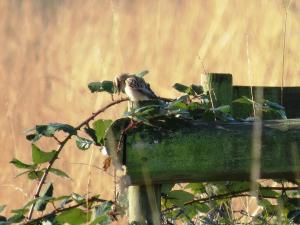 The park was glistening with melting frost and dew. A feature of the morning was the sheer amount of spider webs that were made visible by the clinging dew drops.

The woodland area is starting to be well and truly carpeted by russet, gold and brown coloured leaves. Contrasting nicely with the still green surroundings and lit by the rays of the sun breaking through the branches, it was a beautiful late summer – early autumn collage this morning. 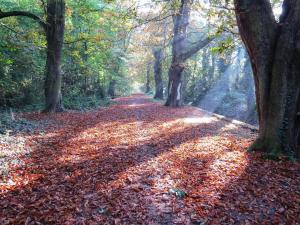 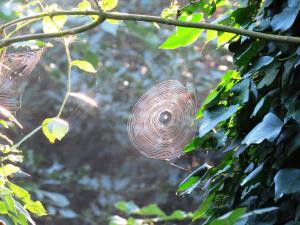 The damp conditions are still throwing up interesting fungi too.

Belted Hoverflies were also seen in some number today. Also known as the Hornet Mimic Hoverfly, it’s the largest hoverfly in the UK but despite it’s appearance, is completely harmless.

Whilst watching the hoverfly at the wood circle a noisy Wren and a somewhat shy Dunnock became accustomed to my static presence. The Wren refused point blank to show more than a tail, but the Dunnock, seemingly protected by some greenery, was a little more considerate.

It was almost mesmerising watching the morning dew being evaporated before my eyes from the stumps at the wood circle. 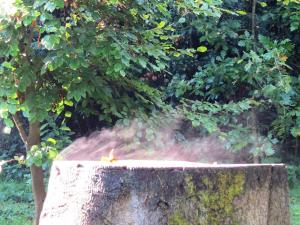 The Cranford Kingfisher was seen yet again and still insists in not posing for my camera. Elsewhere along the River Crane, the Little Grebe’s remain very shy, ducking under the water at the slightest hint of human presence. The regularly seen Grey Heron was spotted taking off and heading towards Berkley Meadow.

One Hobby flew straight over my head from the river side of the park, circling then descending over the woodland. I wouldn’t think these birds will be here much longer, the falling temperatures and onset this week of more seasonal weather may well see them finally make for Africa.

For some reason, I decided that rather then head straight home, I would quickly pop into Lake Farm first. Ever the optimist, the sighting in Northolt of a Grey Shrike earlier this week made me think that it might just, perhaps, maybe pop into Lake Farm. Of course it didn’t while I was there and sadly, the noise and hustle and bustle of birds at Cranford was a stark contrast to the almost silent Lake Farm.

The resident Linnets could be heard and a Robin and Wren were noisily staking out territory but didn’t offer up a good sighting. I then saw a couple of Chiffchaff dart across and teasingly remain in almost clear sight. This was the best I managed. 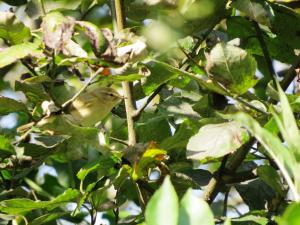 Below where the Chiffy was moving I heard a noise and winding it’s way between the fairly thick branches and leaves was a fox. I lost it fairly quickly and returned back to the warbler. I was about to turn and walk away once I had my Chiffchaff picture, but something made me look up. There, staring straight at me, clearly wondering what I was doing was Vulpes Vulpes, the Red Fox.

We made eye-contact, came to a silent agreement not to bother each other, I took my pictures and quietly watched it disappear into the greenery.

Just when I think Lake Farm has nothing to offer, it throws something up again. Not a bad way to sign off our summer bird and nature watching. Team Sausage are off to sunnier climes for a few weeks, hopefully we can see some different and interesting things to share.

As always, please click on the pics for a bigger and clearer image, some of the spider webs look quite lovely when enlarged.