Who said that the summer months were an inactive and generally dull time for birding? Me? Couldn’t have been surely?

It started last weekend whilst I was at Rainham Marshes. Please have a look at my fellow Cranford Park patch-worker Wendy’s blog from last weekend to see what was happening when I was out east.

Despite my initial scepticism, it did indeed look as if we have Hobbys at Cranford. Sue had posted a few photos during the week and so, I had to pop in on Wednesday evening after work for a look. I had only been sitting at the log circle for five minutes or so when I heard the ke-ke-ke-ke of an airborne Hobby.

I scanned the sky and flying straight overhead was an adult Hobby, followed soon after by another which landed high up but just in view. The light was fading and although my binoculars picked it out quite clearly, the camera struggled. An encouraging sight though.

With the return of Mrs Sausage on Friday evening, we decided to head back to Cranford Park on Saturday morning in the hope of clearer views. All was quiet when we arrived around noon, but the day was sunny and warm and should have been ideal conditions for these birds to be out hunting.

So far so quiet, and as we combined blackberry picking with birding we met Wendy who was also at Cranford hoping to spot our newest bird of prey. We made our way into the open park, and it was Mrs Sausage who spotted the unmistakable shape of an adult Hobby high above us.

Then there were two, flying with considerable speed and occasionally diving almost straight down. Hunting adult Hobby! So now we knew we had at least two adults at Cranford. They would come in quite low at times, then climb high, almost out of view before swooping down and calling. Wendy then texted me saying she had two juveniles in the Kestrel tree. Four Hobby then!

They were up very high and proved very tricky to photograph, most of my images had focused on the copious amounts of leaves and branches that were all around our two young birds. The good news is that we can now confirm we have two adult and a brood of two juveniles resident in Cranford Park. The first time we have had these birds breed in Cranford for five years (as per Wendy’s contacts).

Whilst watching the two juveniles remain pretty still on their lofty perch, we had a tiny Goldcrest fly right past us (Mrs Sausage’s first Goldcrest) and also this juvenile Mistle Thrush came into our sights by the Information Centre.

I returned to Cranford again on Sunday morning to find one of the juveniles sitting very nicely in the open. 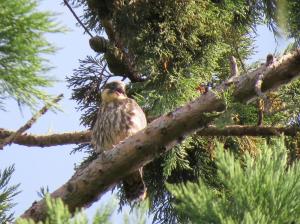 It’s sibling was sitting just below it but was hardly visible. Two Magpie approached the juveniles at one stage and from nowhere an adult appeared to shoo them away. The juvenile remained in position for most of the morning, allowing me plenty of time to get some half decent pics. 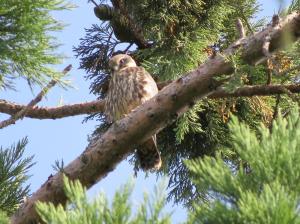 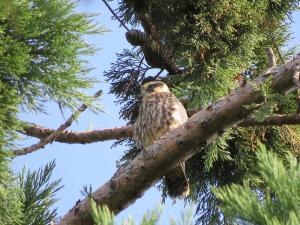 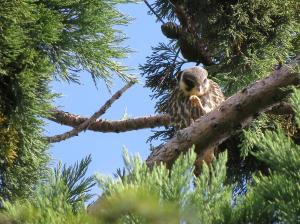 I met Wendy at the log circle where she told me she had just missed a very visible female Sparrowhawk. With the Kestrels, Little Owls, Buzzards, regular sightings of Red Kites and now the Hobby family, Cranford Park has an exceptionally healthy and diverse bird of prey population. There are signs of raptor activity all over the woods at the moment with messy piles of feathers frequently seen, suggesting recent kills.

Just as we decided to make our way back to the juvenile Hobby’s we were lucky enough to also have this glorious Southern Hawker dragonfly land right next to us.

A lovely creature but one definitely in danger of becoming a meal for one of our Hobby. Watching a Hobby catch and eat a dragonfly whilst still flying is one of the sights of summer and we may be lucky enough to see this at Cranford Park.

Upon our return to the Hobby site, we found both the juveniles sharing the same exposed perch. 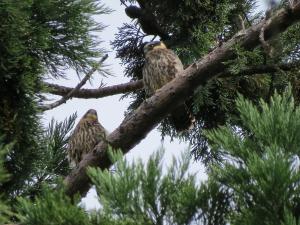 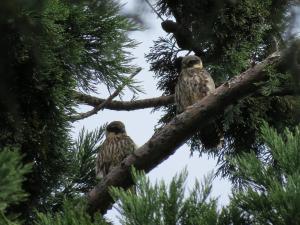 No apologies for the number of Hobby photo’s on this blog entry. We have been very lucky to have been able to have such a rich variety of birds at Cranford this year. Despite the best efforts of Wendy, Sue and I, it is quite possible there are even more exciting species visiting our park that we don’t even get to see.

The Hobby family should be around for a few more weeks before they start their long migration to Africa. Let’s hope that their successful brood this season encourages them to return again next year.

As always, please click on the pics for a bigger image. Full size pics will appear on our Flickr page soon.

One last thing, the blackberries at Cranford are in full bloom now and in plentiful numbers. We picked just enough to make a very nice blackberry and custard tart and a small pot of blackberry jam. Thoroughly recommended! 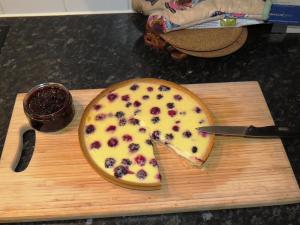