We relocated to the small coastal town of North Berwick for days four and five of our Lothian adventure. We dropped our bags at the incredibly charming and excellently located Devine B&B and Mrs Sausage gave me a brief tour of the town before leaving for her research and allowing me to be battered by the sea breeze!

Naturally, the place was full of gulls, Herring, Lesser Black-backed and Great Black-backed all seen from the walkway around the Scottish Seabird Centre along with the odd Cormorant. 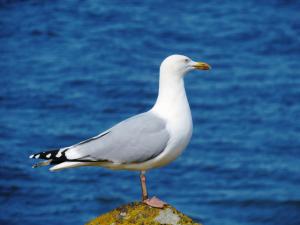 A quick scan further out to sea with my bins showed small white darts hitting the water at great speed and rising again. These were Sandwich Terns, and there were many. 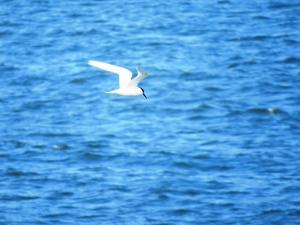 Distinguishable from the Common Terns we have seen at WWT Barnes and at Otmoor with their black bills and legs, it was wonderful to watch these birds scanning the sea before diving at speed into the water, reappearing a few seconds later with a catch.

Driven off by the bracing breeze, I took a stroll along the beach toward Milsey Bay and managed to catch these Oystercatchers feeding on the mudflats. 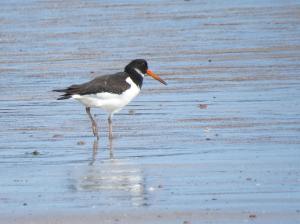 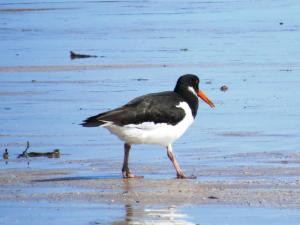 I was a bit disappointed with the lack of wader life seen on my three hour stint. However, with a traditional “freshly caught” fish and chip dinner with Mrs Sausage due soon, it was time to wrap up the days birding, especially with Monday promising good things.

Monday morning saw more sun and a sea breeze that was a bit more tolerable than Sunday’s great gust. I started again at the Seabird Centre, the Sandwich Terns again stealing the show: 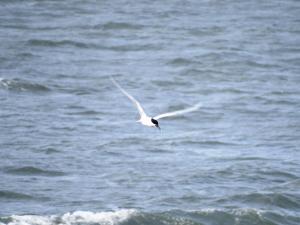 I then went in the opposite direction to Sunday and followed the coast towards West Bay. Still very little wader action with the exception of this lone and very confiding Redshank: 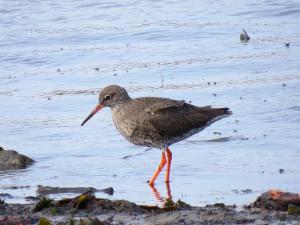 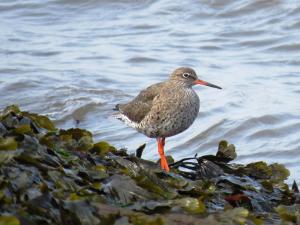 By mid-afternoon I met up with Mrs Sausage at the Seabird Centre for our long awaited Seafari trip. Lucky enough to get the front seats on the RIB (rigid inflatable boat) and to be guided by the very knowledgeable Maggie Sheddan, we quite literally bounced across the water, heading first for Craigleith.

Craigleith, the closest island to North Berwick is a lava dome and home to a large Puffin colony. Once one of the largest colonies in the UK with 28,000 pairs, the Puffins suffered from the invasive plant tree mallow choking their burrows and causing numbers to drop significantly. After several years of volunteers hard work at clearing the island, the Puffins are returning: 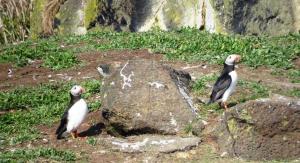 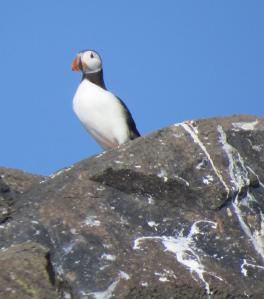 Craigleith is also home to breeding Kittiwakes, Eider and Shags. The Shags in particular looked quite splendid, glinting green in the bright sunshine: 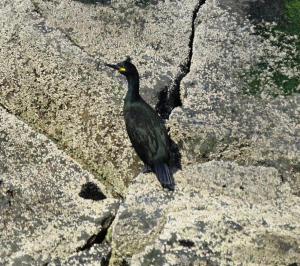 From Craigleith, we took a bumpy, exciting and speedy rid over to Bass Rock. With Puffins, Razorbills, Guillemots and Gannets flying parallel, over and around us, it was truly an experience to savour.

As always, the pics are probably better viewed when clicked on, so please go ahead and enlarge them for a bigger and more detailed image. 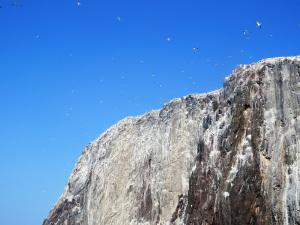 Bass Rock is the biggest single island Gannet colony in the world. At it’s summer peak, it will be home to 150,000 Gannets. Bass Rock, like Craigleith and Arthur’s Seat in Edinburgh, is a 320 million year old volcanic rock and has an interesting human history too. This trip and this blog however, is all about the wildlife.

Visually, the approach was breathtaking. The sight of the green-blue sea and the cloudless blue sky was soon overwhelmed by the strong smell of ammonia though. Hundreds of Gannets were flying on and off the rock as their courtship and mating season was well under way. As the RIB cut engines and we floated around the rock, the sheer number of birds was astounding. 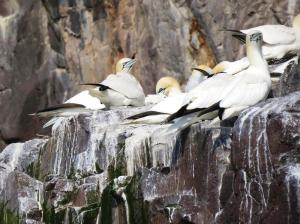 Despite being on a perpetually moving platform, it was possible to get some pictures of some Gannet courtship too: 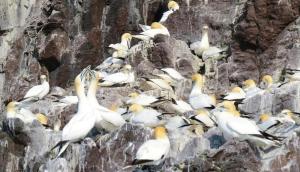 Bass Rock is not just full of Gannets though. The Guillemots in particular seem to be happy to share space with the Gannets. 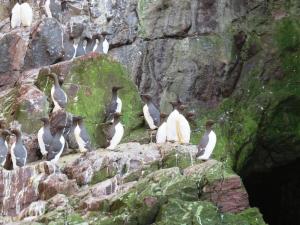 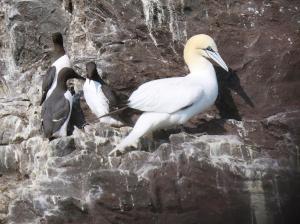 Maggie also pointed out the second raptor of our trip. Using the Bass Rock lighthouse as a feeding station was a Peregrine. A regular sight according to Maggie, I just managed to grab a few images of the Peregrine. I think you will need to click on the images to spot the falcon though. 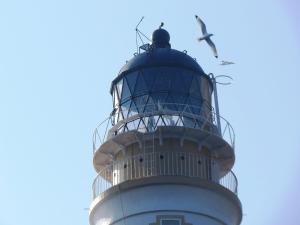 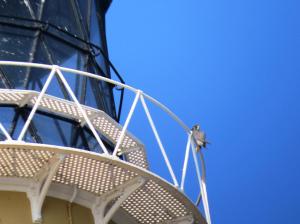 From Bass Rock we made our way along the coastline, passing Tantallon Castle before heading back to shore. As we sailed back Bass Rock was almost glowing white with Gannets, shining in the late evening sunlight. 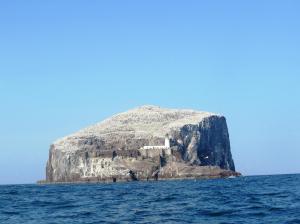 Our last fish and chips of the trip at the excellent Rocketeer restaurant seemed a perfect way to sit back and reflect on the seafari. Mrs Sausage has been lucky enough to have had the experience three times, but assures me it doesn’t diminish with repetition. To be able to taste, smell and almost feel the birds at such close proximity, removed from the constraints of the mainland was an experience we would recommend to anyone.

With full tummies and heads full of memories, we took a walk along the beachfront. We could not have asked for a more perfect evening for the stroll, and all thanks to Mrs Sausage, we managed to find ourselves some of these mottle-coloured shapes moving among the rocks just below the Seabird Centre. Finally, decent waders! Turnstones! 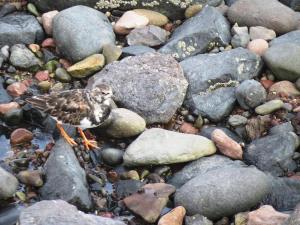 More than a dozen of these small waders were living up to their name perfectly. Picking, turning over and moving the small stones in search of food. 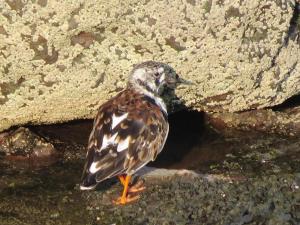 Totally unconcerned by our presence, these lovely coloured birds continued with their foraging while we watched and snapped away. 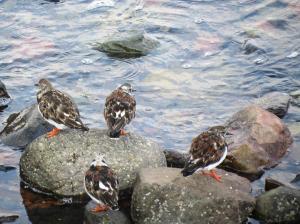 From the noise and volume of the seabirds on Bass Rock to the steady, methodical pick-picking of the Turnstones at sunset, I have to say this was one of our most stunning birding days since Singapore last year.

One response to “Tartan Tales Part 4 – Breathless At The Bass”