This weekend saw the grey clouds and constant rain finally lift and bathe London in some sunshine and clear skies.

With Saturday’s weather report suggesting some grey skies and rain in the afternoon, I took the opportunity to spend the morning back at Kensington Gardens.

Despite not spotting any Nuthatch and giving the Tawny Owl a miss, it was still a rewarding few hours. As mentioned in the last post, the birds familiarity with humans allows some good photo opportunities.

This Ring-necked Parakeet for example: 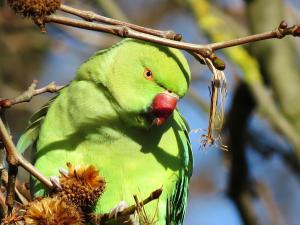 And of course, the always confident, attention seeking, Robin:

This Black-headed Gull even gave me a cheeky wink as I took its portrait:

There were also a few Black-headed Gulls showing summer plumage, their chocolate-brown heads making them stand out among their plainer relatives. This seems very early in the year to morph into summer plumage. Perhaps even the gulls were getting carried away with a sliver of sun? 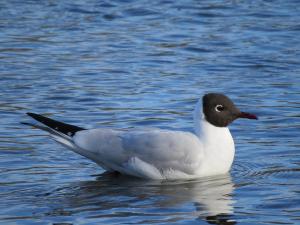 Highlight of the day happened just as I was making my way out. This Green Woodpecker flew across my path, hugging the grass before searching for insects at the base of a tree.

The woodpeckers in the park are one of the few residents that tend to avoid any “people contact” so a degree of stalking in the boggy grass was needed in order to get a half-decent view.

Talking of boggy ground, Sunday saw my first visit to Cranford Park this year. Despite today’s dry and sunny conditions, the amount of water dumped on the park over the last six to eight weeks has left huge puddles of standing water across the open areas and the brook at the back of the woodland had burst its flimsy banks.

There was plenty to see in my ninety minute visit but much of it decided to elude the camera. Frustrating as this may have been, it was good to see the park awash with sunlight.

Dominant among the birds were the usual Ring-necked Parakeets and Carrion Crows. Especially active though were the tits, who were seen everywhere.

This Blue Tit at least was kind enough to allow a shot between the twigs:

And this Long-tailed Tit, taken while up to my ankles in boot sucking mud:

The River Crane was bereft of bird life except for two brave Moorhens taking on the fast flowing high water. No sign of the usual Mallards, Little Grebes or Kingfishers.

The woodland saw one male Kestrel, at least four Jay, too many Blue, Great and Long-tailed Tits to count, around twenty Jackdaw, four Blackbirds and two Robins and a handful of Goldfinch.

Hopefully the daily deluges have ended and we can get back to some regular birding at last.

Please check our Flickr page for more pictures from the weekend.