For me, one of the best times to visit Otmoor is on a weekday. With a lot less foot-fall than the weekends, the reserve seems bigger, quieter, more remote and, for me at least, left to the wildlife.

Chances for weekday visits have been few and far between this year so with last Monday and Tuesday being my last two days holiday of the year, Team Sausage headed north for an afternoon at our favourite reserve.

Conditions were excellent. A bright, winter sun accompanied us all the way, lighting up the Red Kites that criss-crossed and flew low over the M40 and bathing Otmoor in a crisp, golden hue.

Morley’s field was our first port of call and our hopes of winter Thrush sightings were met almost immediately. Fieldfare and Redwing were both flying over and landing among the hawthorn that were all around us. The only problem we had was trying to get photo’s of them whilst facing the low sun. 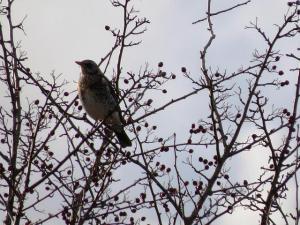 The feeders were busy as well, Greenfinch, Chaffinch, Goldfinch and the usual Tits were seen and two female Pheasants wandered underneath in what seems to be a permanent Otmoor sight.

With more Fieldfare visiting the berry laden trees and this Reed Bunting showing beautifully, it was shaping up to be a wonderful visit. 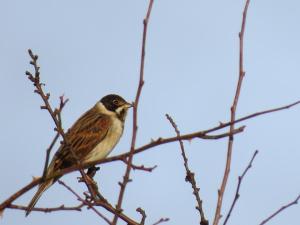 We scanned Big Otmoor for any resting raptors and the recently seen Whooper Swans. Although both eluded us, the scrapes were home to around 20 Snipe. Expertly camouflaged, we thought there were only one or two here when suddenly, a flock of well over a dozen were stirred from their hide and took to the sky. With their white bellies and almost golden-brown plumage showing so well against the clear blue sky, we watched them circle the bridle way and return back to the scrape again.

As we entered to pathway to the first reed-bed hide this Robin decided to audition for the RSPB’s next advertising campaign.

The path to the first hide has, in previous winters, been an almost guaranteed place to see Stonechat. Today, we were lucky to get two. Both females, they were topping the bare branches of the hawthorn, flying up and almost hovering, before returning to the uppermost, exposed branches again.

This was where the weekday visit really allowed us to enjoy them. With hardly anyone else along the pathway, we were able to slowly stalk the Stonechat without them being disturbed and get some reasonable pictures.

The walk to the second, newly built hide, was a little uneventful and we found out from Otmoor Massive member Terry Sherlock, that the Whooper Swans had moved beyond the reserve range earlier in the day. It was reported over the weekend that one of the five Whoopers had been killed, the smart money being on a fox. The remaining four were on the reserve until Monday late morning at least. When writing this entry (Saturday 14th December) there are fresh reports of Whoopers back at Otmoor again.

With the light starting to diminish we joined a small crowd back at the first reed-bed hide in anticipation of the Starling murmuration.

As we approached the hide we were distracted by a very noisy and mobile flock of Long-tailed Tits. Within the tangled mess of hawthorn and branches Mrs Sausage spotted something else. Initially I thought it was just another Long-tailed but a second look changed it all, a Treecreeper. Focusing desperately with the camera for a much wanted record shot it did what Treecreepers do, it crept upwards then flew across to another tree. It took a few seconds more to find it again, refocus….then gone! No luck today with the Treecreeper but there was still the murmuration to hope for.

We first decided to visit Otmoor over two years ago as we had read about the impressive murmurations, but we have only seen a modest number of Starlings and a limited murumuration on our visits before. Displays are not guaranteed and recent reports from the Otmoor bloggers have suggested that most evening roosts have seen good numbers but the birds have headed straight into the reeds. Today we were very lucky.

With a sunset of deep orange, pink and almost purple behind us, we watched small flocks of Starling fly over the reed-bed and wait on the nearby trees. Steadily larger flocks appeared in the sky, encouraging the smaller groups to join them and to merge into swirling, sweeping waves of Starlings.

Sweeping down to seemingly clip the top of the reeds then rising like a pixelated shadow into the sky again, we had a wonderful display to enjoy. The beating of thousands of pairs of wings and twisting, turning, feathered bodies filled the air with a noise akin to waves meeting the shore.

The murmuration is essentially a survival tactic for the Starlings. Starlings are subject to predation from Peregrines, Merlins, Sparrowhawks and on occasion, Kestrels and Red Kites. The birds are striving to stay as close to each other as possible, each one immediately copying any deviation in speed or direction from its neighbour. Because they are massed together so tightly, the slightest change in movement of one bird results in the unified response, creating the swirling, rolling flocks. Each bird is also trying desperately not to be on the vulnerable edge of the flock which may well explain the inward turning ball of birds the murmuration creates.

Here it seems the Starlings have gone all Transformers on us and changed into a giant bird.

The murmuration seen on Monday at Otmoor was not subject to any raptor intrusion. Although a Sparrowhawk was seen at the early stages of the gathering, the Starlings descended into the reeds in their thousands unobstructed this time.

Although the pictures capture some of this impressive murmuration, Mrs Sausage took a small video clip which we have posted up on YouTube. Excuse the “wow” at the end but we think it was justified.

Bigger and better pics are on our Flickr page.

This may be our last visit of the year to Otmoor but what a magnificent way to sign off. 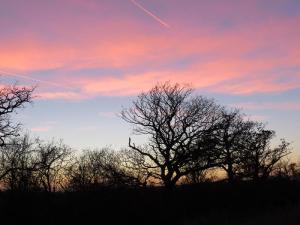