With four days off of work and a weekend in the middle, there have been some opportunities for Team Sausage to partake in some off-peak birding.

Despite some pressing flat-pack furniture construction, time was made for a visit to Cranford Park on Thursday morning.

The first thing that struck me was a the regular high-pitched call of young birds around the wooded area. Most were staying deep in the branches or quickly flying from tree to tree. Great Tits were the most numerous here, Great Spotted Woodpeckers coming in a close second.

Continuing the sightings from Lake Farm, juvenile Jays were also well in attendance. Loud rasping calls would reveal the location of a young and quite bold juvenile on several occasions.

With Blackcap and Wren also being seen, the wooded area was very active with young. I visited what Wendy and I had hoped was a Kestrel nest earlier in the season, but there was no sign of any activity in or around the nest.  Plenty of Crows, Woodpigeons and Jays again but no Kestrels.

This would be a time of year when we would expect to see either a brood already fledged and being trained or a female on eggs for imminent hatching. With Kestrel numbers reported as down across the country, it seems Cranford is no exception

I circled through the woods and came out by the area known as the Headland.  Early spring had seen some significant Whitethroat numbers here and finally there were signs of successful broods as young broke cover here and there.

It was around this time that things became quite active. Just overhead a Buzzard circled and headed west. I managed a few shots and the results showed a slightly ruffled raptor:

As the Buzzard was lost from sight and I was watching the juvenile Whitethroats, a Red Kite appeared over the park. Although Red Kites are a successfully re-introduced bird, this is the first I have seen at Cranford.  As per the Buzzard, the Kite appeared to have some scruffy wing tips and tail feathers.  I am not sure if these are immature birds yet to fully develop or a sign of hard times for the local birds of prey.

Almost as soon as the Kite had completed it’s survey of the open area of the park, a Sparrowhawk came out of the woods, crossed the Headland and also headed west over the trees.

I turned back to see if I could locate the Kite again and this time had a Kestrel move directly across my eye-line from the wooded area into one of the copse trees. The distance and the grey skies made for lousy pics this time and as I tried to move closer for a better view, off the Kestrel went around the far side of the copse, hovered briefly and made off before I could get round to relocate.

In the space of around 15 minutes I had seen more raptors at Cranford than in all my previous recent visits combined. With the clock ticking, I turned for one more look over to the Headland, where I just managed to glimpse the Red Kite over the treeline, picking it up in my bins I noticed it was carrying prey and heading for the M4.

I arrived home to find my flat-pack mission completed (by my screwdriver wielding wife).  After lunched I popped onto our balcony and noticed a fishing Cormorant on the Grand Union Canal. 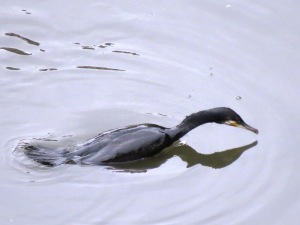 Looking up and expecting to see the usual Crows and Magpies on the opposite roof, Team Sausage was surprised by this: 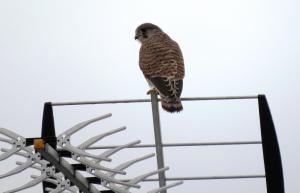 I have been lucky enough to see at least one pair and their brood for the last three years here in Hayes. Two glimpses over the weekend reassured me that they were still around and Thursday afternoon confirmed it emphatically. I don’t know if these Kestrels are from Lake Farm, Cranford Park or elsewhere but all being well, we should be able to see a few more over the coming weeks if previous years are anything to go by.

Today (Sunday) has been our next excursion, this time to a new pasture.  We were lucky enough to be asked if we would both like to attend some bird-ringing at Bedfont Lakes today.

Arriving early this morning we met up with the ringers who explained what they do, how and why.  For anyone who is not aware, the BTO (British Trust for Ornithology) conducts what are effectively bird surveys each spring/summer. It is an effective way to measure Britain’s bio-diversity and to understand the numbers, health, migration and breeding habits of our birds.

The practice is humanely carried out by trained experts (our contact today has been ringing for over 25 years) and as we witnessed ourselves, with the minimum of stress for the birds.

It was a new experience to see birds we usually only make contact with through binoculars or scopes being carefully handled and having a brief check-up.

This Reed Warbler was the first of many we saw today: 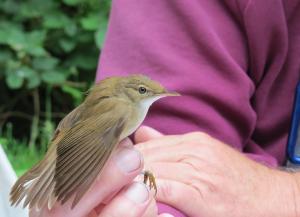 And this docile juvenile Great Tit in the DIY hand of one of Team Sausage:

No birds were harmed in the writing of this blog.

Bedfont Lakes was a new “patch” for us to explore and having enjoyed our ringing experience we made for the hides.

It wasn’t all birds either as on the way we came across two interesting fungi: 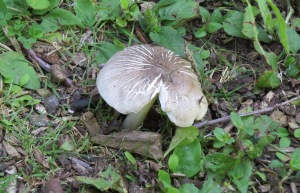 We are struggling to identify the top one but are sure the second is a common Field Mushroom. Answers on a postcard please if you are a fungi fan!

With Chiffchaff heard and Great Spotted and Green Woodpecker seen there was plenty of activity here. We headed for the Tern hide to find it swamped with Black-headed Gulls and their young. Among all the gullage however we managed to see two Common Tern with a brood of 2-3 chicks.

Black-headed Gulls were everywhere though:

The Reed hide did offer some variety though with a Great Crested Grebe and two well hidden and protected chicks: 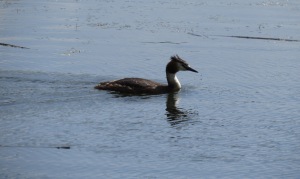 Also seen on the water was this Egyptian Goose: 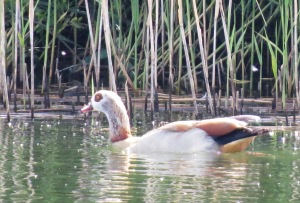 According to our ringing expert the Egyptians have produced a brood at Bedfont Lakes and there was certainly a female still on the tern raft as we observed.

A very different type of birding for us today but a fantastic insight into an aspect of British bird life not seen by everybody.

With good weather expected we hope to be out and about over the next few days as well.

Many thanks to my mate Stuart for the ringing contact.

We are always interested in any opportunities to learn about other nature related technologies and hear from those that use them.

If you would like to share your experiences with us please drop us a line via this blog.

One response to “Raptors, Rings and Things”