With some family commitments and some iffy weather forecast, Saturday morning presented itself as the only viable opportunity for some birding this week. It was a toss up between Cranford Park and Lake Farm, but my friend Wendy had reported that Cranford was pretty quiet on Friday and she would be at Lake Farm too on Saturday. Decision made in that case.

Lake Farm was sunny-ish but there was a fair breeze moving across the open spaces of the park. Wind is not really a birders friend; it keeps a lot of them low and on the ground or in cover and those that do fly tend to zip by before you get a chance to id them.

Despite some early pessimism, my first few steps into Lake Farm were a portent of things to come, with a few noisy Whitethroat darting from bush to bush. I met up with Wendy soon after and we had what would be the trend of the day with a fledgling. At the top end of Lake Farm she spotted a small bird on some exposed hawthorn. A recently fledged Whitethroat:

Lake Farm has been heavily populated with Whitethroat this spring, so it was good to see some success manifest itself. Whitethroats tend to have 2 broods between April and July so fingers crossed that this is one of many.

Kestrels numbers nationwide are reported to be down. Lake Farm and my other frequently visited reserve of Otmoor in Oxford used to be guaranteed spots for these birds on every visit.  I last saw a Kestrel at Lake Farm around Easter, but today Wendy and I were treated to several fly-pasts from a female and one hover right over our heads. 20 minutes in and already some sightings that were a real pleasure to share.

We next headed for the Willow Tree where we know Great Spotted Woodpeckers have been nesting this year. Although the nest-hole is heavily obscured with leaves we were lucky to catch glimpses of a recently fledged juvenile. My pics weren’t great though as the youngster kept itself deep in the branches. Both juvenile and mature Great Spotted Woodpeckers were heard calling throughout the day.  With these birds only producing one brood a year and rarely returning to the same nest, it seems we have seen the best of the Great Spotted this year, I do hope that at least some of the fledglings remain at Lake Farm though, they are pretty photogenic birds and I think the habitat there is sufficient to sustain them.

As we made our way around Lake Farm we had glimpses of Reed Buntings (mostly males) House Sparrows and Linnets. Rising and falling on the breeze and testing our id skills as they made for the long grass or hawthorns for shelter.

I finally managed to get a record shot of a Green Woodpecker, just to the side of the BMX track:

Outnumbered at Lake Farm by the Great Spotted Woodpeckers and seen less frequently at Cranford Park this year I was beginning to wonder if I would see one at all this spring. This female was hunting in the open and spooked a Skylark into flight.

It was only after the Skylark rose, calling as it went higher and higher, we heard a clear and higher pitched noise coming from the BMX track itself. After some fruitless scanning Wendy caught sight of something on one of the mounds:

Our third juvenile of the day, a young Skylark. Calling out, either as an alarm call or for parental attention.

We were then joined by Sue and Jasper the birding dog. Probably the only dog I have seen at Lake Farm that sticks to the paths rather than rampaging through the long grass.

It was while making our way around Lake Farm that Wendy noticed a huge amount of hawthorn and bushes from the Hayes Town perimeter had been chopped down. I can see absolutely no reason for this to have been done. The proposed school construction is not due to begin for several weeks, the flowers and the bushes themselves were in full bloom. This flora would also have been home to Blackbirds, Sparrows, Dunnocks, Wood Pigeon, Collared Doves, Reed Buntings etc. and was quite possibly containing nests for all or some of these birds.

This was nothing short of council-sanctioned vandalism; carried out without thought, consideration or research.

Moving on to more pleasing aspects of the day, our trio were then met by Roy, another Lake Farm regular. With tales of nesting Sparrowhawks and more, we followed Roy down the Grand Union Canal, cutting through to Stockley Park to be greeted by this magnificent Grey Heron:

What really took our attention though, as promised by Roy, was this noisy, lone Reed Warbler. Reeling off it’s full repertoire of calls, click, whistles and chirrups for what seemed our own pleasure. Warning: indulgent pics coming up. 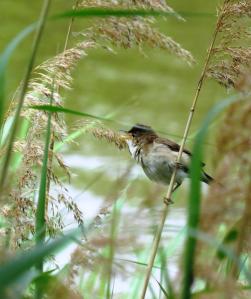 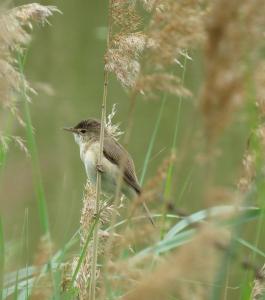 With the slightest suggestion of a Cuckoo call nearby, we thought our day had peaked and made our way back to Lake Farm. Just as we were about to walk onto the canal towpath we flushed 4 or 5 birds from a tree.

What looked very much like a whole brood of recently fledged Jays scattered around us. In a day littered with newly fledged birds, this was a real bonus. Where we had previously had one or two birds, here we had 4 or 5.

A fantastic, spring morning at Lake Farm. Sadly soured by the destruction wrought by the council, but tempered by Roy sharing a previously unexplored part of our local area. All the better to be sharing it with Wendy, Sue and Jasper.

Our patch just got bigger!