On Easter Sunday I took a long overdue opportunity to head to our favourite RSPB Reserve, Otmoor in Oxford.

Otmoor is a 1,000 acre mixture of reedbeds and meadows which offers a tremendous variety of bird and other wildlife.

My return to Otmoor (31st March 2013) coincided with the first sunny albeit chilly day for some time.

Arriving just after 0730 I wrestled with having to carry 3 items of visual media now, bins, scope and the camera and staggered off on a now familiar path in a mostly deserted reserve. It was still frosty but the light was excellent and the sky was just taking on a cold blue hue as the sun rose.

After snapping some badly focused Dunnocks on the frosty ground I managed to get this bird fixed nicely. I am however still struggling to id this one so any offers are gratefully accepted.

Passing the feeders where a lone Pheasant loitered I reached the cattle pens as a fellow birder pointed out a distant Barn Owl hunting over the reedbeds as the usual array of crows, Great and Blue Tits passed overhead and among the trees. A brief sighting of a Ring-tailed Hen Harrier brought encouragement of more to come.

Lapwing and Redshank were showing well although the first reedbed hide was fairly quiet. I met up with some members of the “Otmoor Massive” and as they usually seem to attract birds like magnets I joined the small party.

The second reedbed hide was partially frozen with some species floating along while others, especially the ubiquitous coots slipped and stumbled on the frozen section. I managed to capture a Great Crested Grebe serenely coasting among the chaos: 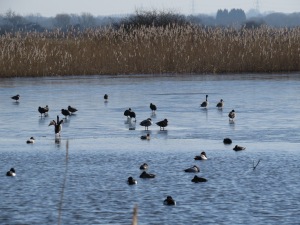 The main reason for heading up to this hide was to try and see a floating rarity, a drake Ferruginous duck. Normally found in Eastern Europe and Asia the Ferruginous duck (named after the iron colour of its plumage) was among the Tufted Ducks and Pochards. A few turn up in the UK every year but apparently this is the first to find its way to Oxfordshire since 1989. Despite a shy demeanour I managed to get one shot of the Fudge Duck, typically burying its head just as I focused: 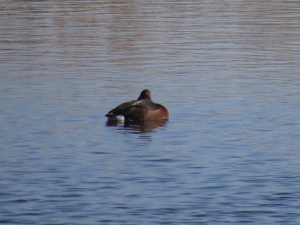 With Red Kites overhead and a brief glimpse of the Barn Owl quartering in a distant oak we moved off. Other sightings this day included Curlew, Ruff, Dunlin, Shoveller, Pintail, Stonechats, White-Fronted Geese and Reed Buntings.

It was good to be back at Otmoor and I hope to be a regular again, especially as hints of spring were beginning to show.